Pooper:
Charlie Brown is befriended by the Little Red-Haired Girl and is then truly embraced by the other kids. Snoopy finds a happy ending for his book, although Lucy says it’s one of the worst things she’s ever read.

Long Ending:
No matter how hard Charlie Brown (Noah Schnapp) tries, things never seem to go his way. For years, he has tried to fly his kite to no success as it always gets caught in the “kite eating tree.” He has dreams of being a successful baseball pitcher, but his pitches are always hit. He has a large group of friends and little sister that like him, but generally don’t respect him. His truest companion is his imaginative and talented dog Snoopy (Bill Melendez). Everything changes when the Little Red-Haired Girl (Francesca Capaldi) moves into town and is placed in Charlie Brown’s class. He quickly develops a crush on her and realizes that since she is a new student, he has a fresh start to show her who he really is (instead of the hard luck goof-up that his friends perceive him to be).

Charlie Brown, with the help of Snoopy, tries many things to win the Girl over. All of them end in disappointment:

At the end of the year, the children are told to choose a pen-pal partner. To Charlie Brown’s great surprise, the Girl chooses him as her pen-pal. He hesitates as to whether to ask her why she chose him (believing she did it out of pity), but ultimately finds the courage to approach her. The Red-Haired Girl explains that she saw who Charlie really was over the year – compassionate (for sacrificing his own talent show act to save Sally’s), honest (for publicly admitting he didn’t get a perfect score on the test), brave and funny (for dancing in front of the other kids at the dance), and sweet (for doing the book report solo while she was out of town). The Girl then promises to write to him while at camp. The other kids in town overhear this conversation and, agreeing with her assessment, they celebrate Charlie Brown.

Throughout the film, Snoopy and his bird friend Woodstock are writing a novel wherein Snoopy is a flying ace during World War I who fights the villainous Red Baron. The flying ace finds love with a dog named Fifi (Kristin Chenoweth), but Fifi is abducted by the Red Baron. He goes to save Fifi, but is shot down by his nemesis. After almost giving up, the flying ace launches a second assault on the villainous forces and, with the help of his friends (and Fifi’s own resourcefulness), rescues the girl.

There are three post-credit scenes. In the first, Lucy convinces Charlie Brown to try and kick the football as she holds it (a classic gag from the comic strip this movie is based on). She says that she wouldn’t pull the ball away from someone like Charlie Brown since she now knows that he has all the qualities expressed by the Red-Haired Girl. But inevitably, she pulls away the ball before Charlie Brown can kick it, commenting that he has all those qualities, but is also gullible. In the second, the Red Baron resurfaces and renews his rivalry with Snoopy’s flying ace. The final clip shows Linus’ model Red Baron airplane (that had flown out of control at the beginning of the film and wreaked havoc over the course of the film, including ripping Charlie Brown’s book report to shreds) finally runs out of batteries and plummets into the local town lake. 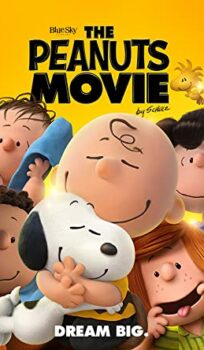