LONG VERSION:
Set in 1957, Cesar Faz (Clifton Collins, Jr.) has been fired from his job as an assistant coach for the St. Louis Cardinals and returns home to Monterrey, Mexico.  Soon after, he is befriended by several young boys, all of whom are choir boys at the town’s Catholic church, headed by Padre Esteban (Cheech Marin).  One of the boys, Angel Macias (Jake T. Austin), convinces Cesar to coach the boys and turn them into a real Little League baseball team.  Through Cesar’s baseball knowledge and Esteban’s prayers and support, the team quickly comes together.  Later, Little League Baseball awards Monterrey a charter and the team is on their way to their first tournament in McAllen, Texas.  Because the team is not expected to win, they only get a travel visa for three days.  Just as the team is about to leave, Angel’s father tells him he can’t go.  He doesn’t see the benefit of playing baseball when it won’t get him anywhere in life.  Angel tells his father he is going anyway and boards the bus to McAllen.

Once in McAllen, they team, along with Cesar and Esteban, faces racism from the other teams and the locals.  Despite being a huge underdog, the boys from Monterrey not only defeat the team from Mexico City (the reigning Mexican champions), but all of the other teams and advance to the next round in Corpus Christi.  The win attracts the attention of the local newspaper editor, who assigns reporter Frankie Stevens (Emilie de Ravin) to follow the team until they lose, even though she hates baseball.  In Corpus Christi, the team faces more racism, but win that tournament and move on to the next round in Fort Worth.  Frankie’s stories about the team of underdogs from Mexico facing racism but winning anyway begins to get attention from around the state.  They win in Fort Worth and advance to the Southern Regionals in Louisville, Kentucky.

In Louisville, the local police learn that the team’s visas are expired and want to deport them back to Mexico.  Padre Esteban is able to get the visas extended, but only for one coach, so he must return to Monterrey.  At the ballpark, the team refuses to take the field unless they receive a blessing, something they have done before every game.  The head groundskeeper (Louis Gossett, Jr.) tells Cesar his nephew is a preacher, and is summoned to bless the team.  The groundskeeper also tells the team that the opposing pitcher is tipping his pitches, and they use that to their advantage and win the game, which qualifies them for the Little League World Series in Williamsport, Pennsylvania.  Afterward, Cesar asks the preacher how his uncle knows so much about baseball.  He is told that the groundskeeper is Cool Papa Bell, a former Negro League All-Star who was once a teammate of Jackie Robinson.  The preacher and his wife give Cesar that week’s church offering to pay for the trip to Williamsport, and they also agree to join the team there.

Prior to their first game in Williamsport, Cesar is approached by two members of the Mexican mob.  They demand that Angel pitch the first game, because they want a guarantee that Monterrey will appear in the championship game.  If Cesar refuses, they will tell the team the truth about what really happened in St. Louis and they will lose all respect for him.  Cesar defies them and doesn’t start Angel, but since he knows they will follow through with their threat, he pulls the team aside and tells them the truth.  He wasn’t a coach for the Cardinals, but actually the towel boy who was fired for talking back to the racist players.  The boys tell Cesar they already knew that and didn’t care.  The team then goes on and beats the team from Connecticut to advance to the championship game, where they will play the team from California.  Following the game, Cesar is approached by the GM of the Cardinals, the man who fired him at the beginning of the movie.  He realizes the mistake he made and wants to re-hire Cesar, but this time as a coach.  Cesar says he’ll think about it.

In the championship game, Monterrey hits a grand slam to take a four run lead into the last inning.  Angel has also not allowed a baserunner, and Cesar warns the team not to mention to Angel that he is throwing a perfect game.  Angel quickly gets the first two outs, but suddenly his pitches are all over the place.  Cesar talks to Angel on the mound, and Angel says that the win and the perfect game doesn’t matter to him because nobody will care.  He tells Cesar what his father said to him back in Monterrey and that he also knows about Cesar’s job offer and can’t believe he would go back despite what they did to him.  Cesar tells Angel that he has no intention of going back to St. Louis, and that his father does care.  As a result of their success due to Angel’s pitching, his father now knows that baseball matters to his son and had Padre Esteban send his other son’s St. Christopher medal to Williamsport.  That son died earlier in the year and that was the medal he always wore.  Re-energized, Angel strikes out the last batter, earning the perfect game and winning the championship for Monterrey.  As the team celebrates on the field, Frankie congratulates Cesar and thanks him to allowing her to tell their story.

The movie ends back in Monterrey, with the team getting a heroes welcome.  Angel sees his father and starts to apologize to him for the way he left before the McAllen tournament.  Before he can finish, Angel’s father hugs him and tells him he is proud of him and loves him.  Title cards reveal that Angel’s perfect game is the only one ever thrown in a Little League World Series championship game, and he eventually became a Major League pitcher for the California Angels.  Also, the team returned to Williamsport the following year and won the championship again. 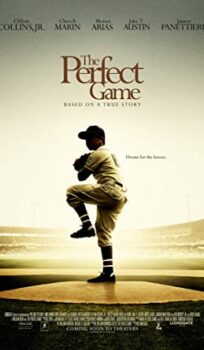