Short Version
Warwick is a police lieutenant suffering from delusions. He imagines his entire dinner party and only pretends to torture/kill John, a bank robber hiding out at his place. John awakes the next morning in an alley with fake wounds, tracks down the money he stole, and escapes to Mexico. He later sends a detective a clue about Warwick’s unstable mental state.

Long Version
John (Clayne Crawford) is on the run following a bank robbery. He uses information from a postcard he finds to convince Warwick (David Hyde Pierce) they have a mutual friend so he can hide in Warwick’s house. Warwick is busy preparing for a dinner party but offers John some wine while he waits for his guests to show up.

The wine is drugged, and when John awakens he finds himself tied to a chair and Warwick busy talking to an empty room, though from Warwick’s point of view it is full of people. The film jumps back and forth between what John sees, and what Warwick is hallucinating throughout his entire dinner party. John is forced to watch and occasionally participate. Warwick keeps him drugged so he is unable to walk or make any coherent noises. At one point, Warwick shows John a scrapbook from his last dinner party, which includes Polaroids taken throughout the night that show an unidentified man with progressively larger injuries. The final page shows the man lying in a bathtub with his throat slashed. Warwick then puts on a home movie, showing him repeatedly cutting himself across the chest with a large kitchen knife while laughing. While watching the film, Warwick remarks to John that he did his own hair and makeup. It is implied through photos in his house that Warwick has no real friends, and even mails himself postcards like the one John found in his mailbox.

After seeing Warwick play chess with one of his imaginary guests, John convinces him to play him in a match. If John wins he agrees to let him go. John wins, and as a flustered Warwick releases his bond, John grabs a display sword from the wall and thrusts it into Warwick’s chest, only to discover it is a theatrical sword with a collapsing blade. Warwick once again knock John unconscious.

The following morning, John is seen laying in a pile of garbage with a large gash across his neck, while Warwick calmly places Polaroids from the night before in his scrapbook. The police, who have been tracking John down throughout the movie, arrive at Warwick’s door just after he takes his medication, with his imaginary friends arguing over whether he really needs the medication to “get through work.”

The big twists come as John awakens in the garbage and discovers most of his wounds, including the slash across his neck, are fake. At the same time Warwick answers the door and is addressed as Lieutenant by the detective. Warwick knew who John was all along and was actually working on the bank robbery case.

John spends the morning tracking down his partner from the bank robbery, who it turns out double-crossed him in an attempt to keep all the money for herself. Meanwhile, Warwick and the police are tracking them both down, and surround them in a parking garage. As John attempts to escape, he comes face-to-face with Warwick again, who offers to let John go in exchange for the money he has from the robbery. Warwick holds John at gunpoint, but John guesses that he has never really shot anyone and that his fake-torture was Warwick’s way of fulfilling his violent fantasies. Even so, he gives Warwick the money, and Warwick gives him some back to help him get across the border to Mexico.

Several months later, an envelope postmarked from Mexico arrives at the police station. The detective who opens it discovers one of the Polaroids Warwick had taken of himself and John during the “party.” The detective confronts Warwick, who dismisses it as fake. The detective insists on pursuing the matter and says he’ll need to search Warwick’s house. Warwick says that will not be a problem, and even  invites the detective to come over that evening for a dinner party. 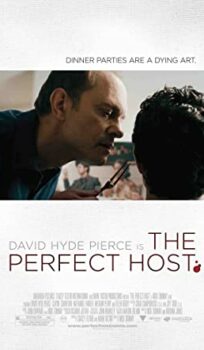