Pooper:
The exorcism is successful, the dybbuk is re-imprisoned in her box, and the family happily reunites. The dybbuk box is given to Tzadok for disposal, but he is fatally hit by a truck on the way back to his home and the dybbuk box is launched from the car onto the road, awaiting a new person to pick it up and unleash its evil.

Long Ending:
Clyde (Jeffrey Dean Morgan) and his wife Stephanie (Kyra Sedgwick) are separated and considering divorce. They have two daughters, the eldest is Hannah and the younger is  Emily (Natasha Callis). Clyde was never the most attentive father and he is considering moving to North Carolina to take an exciting job coaching a successful and renowned basketball team. While having the girls for a weekend, he takes them to a yard sale where Emily buys a beautiful antique box with Hebrew writing on it. An injured man inside the house sees her holding the box and begins freaking out, but a nurse comes in to sedate him.

The next morning, Hannah finds a strange bug crawling around in her bed. Clyde drops them off at Stephanie’s house and meets her new boyfriend Brett, who is considering moving in. The next time the girls are at his house, the box opens on its own in the middle of the night and a whisper in a foreign language (either yiddish or polish) begins talking from within. Clyde walks in the next morning morning to find Emily talking to the box. She does not appear to be herself and stabs Clyde’s hand with her fork at the breakfast table when he tells her to stop scraping her fork against the plate as she eats. That night, a swarm of bugs appears in the bathroom and swarmed all over Emily’s room. Clyde returns the girls and is still largely inattentive. When he talks to Emily on the phone, she asks him not to touch or check the box. He, of course, checks out the box, but finds nothing odd.

The next day in school, a boy steals Emily’s backpack with the box in it, clearly hoping to pull some sort of prank. When Emily discovers his theft, she violently attacks the boy, slapping him repeatedly across the face. Her parents attribute the behavior to their separation, and the teacher confiscates the box. That night as she is grading papers, the teacher hears the foreign whispers and tries to open the box. A gust of wind arises in the room, and she is fatally beaten and thrown through the window by an invisible entity. Emily seems unworried about her teacher’s death, telling Clyde she just wants the box back. Clyde gets the box, but throws it in a dumpster of a nearby gas station on the way home.

When he breaks the news to Emily, she goes into a violent rage and is slapped by an unseen force – making it appear that Clyde has slapped her. She then runs screaming from the house, and makes her way to the gas station to retrieve the box. Emily opens the box and begins talking to the spirit inside, but the conversation takes a turn for the worst and bugs fly into Emily’s mouth. Clyde finds her unconscious, and when the police arrive, they blame Clyde and he loses his custody rights.

A series of odd events occurs with Emily, in which she finds moving fingers down her throat and later menaces Brett. Meanwhile, Clyde takes the box to a local college professor, who tells him the Hebrew indicates that it is a dybbuk box. Folklore says that a dybbuk is an evil spirit that were trapped in boxes such as these by Orthodox Jews centuries ago. Of course, the professor doesn’t believe dybbuk’s exist. Clyde stops by Stephanie’s house with an Old Testament while Stephanie is out and begins reading it to Emily, who is sick in bed. A wind begins to gust and eventually, blows the book out of Clyde’s hand as Emily looks at him with scary eyes. He demands to know who this entity is, but Emily remains quiet and Stephanie comes home and kicks him out.

Clyde drives to a nearby Orthodox Chassidic community with the box. There, he meets a young man named Tzadok (Matisyahu) who takes Clyde to meet his father, the head of a Jewish community. They reveal that the dybbuk, once released, inhabits the body of a pure soul and essentially eats their essence to restore its own life. The members refuse to perform an exorcism, saying Emily’s life is in god’s hands now, and refuse to break the Sabbath. As Clyde leaves, Tzadok says he will help, saying that the Sabbath may be broken to save someone’s life. Meanwhile, Stephanie finds Hannah late at night eating all the food in the refrigerator. A voice tells Stephanie that Emily “isn’t here anymore” and throws glasses at her mother. Emily then attacks her mother with a shard of glass, but at the last moment regains control of herself and collapses in Stephanie’s arms.

The next morning, Stephanie, Brett and Hannah prepare to bring Emily to the hospital. While Emily and Brett are outside alone, Emily conjures some wind and Brett’s teeth all fall out. Brett gets in his car and fleas, never to be heard from again, while Emily collapses. Hannah runs out to help, and sees bugs in Emily’s mouth. The hospital gives Emily a full-body MRI, and they find a human face looking at them from within Emily’s chest. As Clyde and Tzadok go to the hospital, Tzadok breaks the mirror in the box and finds the dybbuk’s name hidden behind it – a name that translates into eater of children’s souls. When they arrive at the hospital, Stephanie and Hannah agree that the exorcism is the only way to save Emily.

The family and Tzadok carry Emily into a room in the now conveniently empty hospital. Tzadok begins the exorcism and demonic things happen such as levitation and Emily’s eyes roll back in her head. The lights all burst and Emily beats up Tzadok and runs off, with Clyde in hot pursuit. Emily attacks Clyde and he fights back, asking the demon to take him instead. When Tzadok and the rest of the family find them, Emily is seemingly cured and crying on the floor in Clyde’s arms. Tzadok is unconvinced that its over and begins the exorcism again, to find out that Clyde is now possessed. As the exorcism continues, a hand emerges from Clyde’s mouth, and soon a whole demonic body. Tzadok compels the demonic spirit back into the box and the day is saved.

The next morning, the two sisters sleep peacefully in the same bed, and we see Clyde is making breakfast for Stephanie and the kids. He tells Stephanie he has rejected the North Carolina job and the two embrace. Tzadok, who is on the road with the box, calls Clyde to check in and see how to return the car he has borrowed from Clyde. Clyde says Tzadok can keep his car as thanks, and also asks what he will do with the box. Tzadok says he will discuss with his father how to dispose of it, when suddenly he is broadsided by a semi truck in a clearly fatal accident. The camera zooms over the wreckage, and we see that the dybbuk box has launched out of the car onto a nearby lawn, and we hear the spirit’s whispers as it waits for someone to retrieve it. 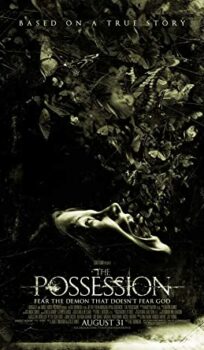