The Princess Switch 3: Romancing the Star(2021)

The heist appears to be successful but at the last minute Peter (Remy Hii) steals the star. However, he returns it to Fiona the next day at their old boarding school, in an attempt to get her to speak to her estranged mother. She does, and eventually the two reconcile. Fiona then returns the star to Stacy and Margaret (Vanessa Hudgens).

At the grand Christmas Tree lightening, Peter shows up and apologizes to Fiona for being angry at her for not returning his feelings but she says he was right, she does love him, and the two kiss. 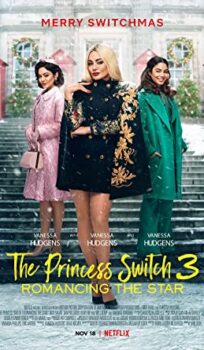