In the year 2022, the “New Founding Fathers” of America declared that all illegal activity is legal for one night per year.

A wealthy family of four, James (Ethan Hawke), Mary (Lena Headey) and their two kids Zoe and Charlie are preparing for the Purge, and locking down the house using the security system that James has, and has sold to the entire neighborhood. The murders start quickly.

First we find Zoe’s teen boyfriend in the house who is killed while attempting to murder Zoe’s father, who would not let them date.

Charlie, being young and big hearted, sees a man outside his house who is injured and begging for help, Charlie opens the security system and lets him in to hide from a bunch of rich people chasing him to kill him. The family is warned by the attackers to find the man in their house and deliver him to them or the attackers will kill the family as well. James finally finds the injured man in his house, and after taping him up and stabbing him, James decides it’s wrong to hand the man over to be killed and opts to fight. The attackers get into the house, the family starts killing them off. The leader of the attackers stabs James with a machette. Suddenly, the neighbors show up and start killing off the attackers. James appears to be nearly dead, and the family is thanking the neighbors for saving them. Suddenly, the neighbors announce that they are actually there to kill the family because they were tired of the family flaunting it’s money. Just as Mary, Zoe and Charlie are about to be murdered, the injured man from the beginning shows up and saves the family. He asks Mary if she wants him to kill the neighbors. Mary is tired of the violence and insists they all sit at the table until 7am when killing is illegal again. At the last moment, one of the neighbors grabs a gun to tries to shoot Mary, but Mary socks the woman in the face, breaking her nose and teeth.

At 7am, Mary tells her neighbors to leave the house, and the injured man from the night before also leaves. James appears to be dead, but his family survived the night.

At the end of the movie, dead bodies cover Mary’s lawn and home, and a news report mentions that last night’s Purge was the most successful yet! 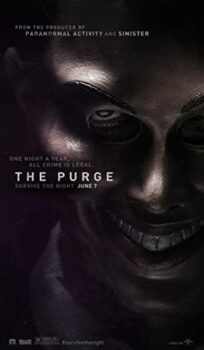