After the parade, where Abby gets raised up in the parade and has a moment with her teacher, it says, “One Year Later…” on the screen.

Then it shows a picture of her teacher with his son hanging on the wall and it pans over to show a kitchen with Abby standing over a big pot with employees around her.  One calls out several orders and then she’s told by an employee that she’s got a visitor.

She turns around and it’s Toshi.  He tells her that he hated his job so he’d quit and started to write music again.  It shows some customers getting served bowls of noodles, she says, “welcome to my ramen shop,” and then they hug.

As the camera pans back we see that her noodle house is a tiny building sandwiched — and the sign says, “The Ramen Girl,” — between two taller buildings and in the background is the Empire State Building showing that she’s back in New York. 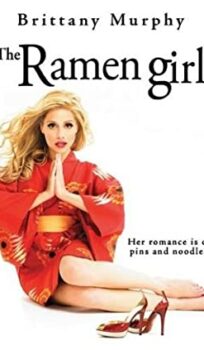