Hannah Schmitz (Kate Winslet) was a Nazi Guard who used to kill children after having them read to her because she herself was illiterate.

Long version (and it is long):
At a young age, Michael Berg becomes romantically involved with Hannah Schmitz, a trolley attendant in late 1950s Germany during the summer. They both keep their affair secret from all parties. Their sex game was to have Michael read to Hannah before they would make love. One day, Hannah gets promoted at work, and leaves without telling Michael.

Years later, at a legal student seminar, Michael and his class are brought to a trial of six Nazi guards, one of whom is Hannah. A survivor tells the story of a guard who would choose children to read to her before she escorted them to Auschwitz for execution.

Though secretly illiterate, Hannah admits to writing a letter admonishing herself and her cohorts responsible for the church bombing that killed nearly 300 Jews. She is sentenced to life imprisonment.

More years later, Michael, now a successful lawyer, sends Hannah books on tape, which he personally dictates. Hannah uses these dictations to learn how to read and write, and begins writing one sentence letters to Michael thanking him for remembering her. Michael eventually stops sending the books.

When Hannah is about to be released after 20 years, Michael is contacted because he is the only contact Hannah had made known to the prison. Though reluctant at first, Michael makes the trip to the prison to see Hannah after all the years, and agrees to help help get back on her feet when she gets out. Hannah, wishing for a life with Michael, kills herself the day before she is to be released.

In a will that she wrote, she asks Michael to give all her money to the survivor who came to court and testified 20 years ago. When Michael goes to New York to try and give her the money, she refuses, but agrees to let him use it to fund a Jewish literacy program, even though she say “Literacy was never a problem for the Jews.” But she keeps the tin can that the money came in, because it reminded her of the can she lost in the concentration camps.

In the present, Michael brings his daughter to Hannah’s grave by the church they visited together, and tells her his story. 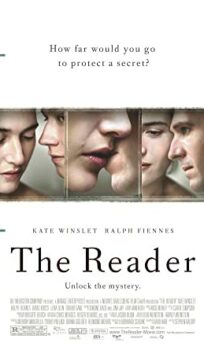