Pete (Edward G Robinson) and Ellen are an older couple who live on an isolated farm with their adoptive daughter, Meg.  They keep to themselves and are viewed as mysterious by the town.  Meg convinces Pete to hire one of her 12th grade classmates, Nate, to help on the farm.  Everyone gets along great, until Nate says he is going to take a shortcut home through the old woods.  The woods are part of Pete’s property and he forbids anyone from entering them.  Pete becomes agitated, insisting the woods are dangerous and contain a haunted red house, and that Nate must stay out.

Nate returns spooked, after hearing moans and yells.   However, a few days later, Nate is embarrassed at his cowardice and goes through the woods again.  Nate is struck from behind and knocked out cold.  Nate insists that Pete hit him, but Meg and Ellen say Pete has been in the room with them since Nate left.   Nate and Meg become obsessed with searching for the red house, but can’t find it.  Pete fires Nate, and bans him from their property.

Pete had hired Teller, a local thug, to frighten Nate from the woods.  Pete tells Teller to fire a few shots near Nate to frighten him away.  With Nate banished, Meg goes in on her own.  Teller fires at her.  Running away, Meg falls and breaks her leg.  As Meg recovers, Pete begins to crack up.  Pete starts calling her Jeannie, and is becoming controlling and domineering.  Ellen and Pete have a conversation, where we learn that years ago they rented the red house to a young couple.  Pete was having an affair with the wife, Jeannie.  The husband found out, and the couple decide to move away and try and start over.  Pete goes to the red house, to demand that Jeannie leave her husband and stay with him.  Jeannie refuses. They hear the husband returning, and Jeannie starts yelling.  Pete covers her mouth to stop the yelling, but suffocates her.  Pete claims he was just trying to keep her quiet, and her death was accidental.  However, he admits he killed the husband in cold blood, when he entered the red house.  Pete buried the bodies in the basement, and lives in fear that they will be discovered.  However, since the husband told everyone they were leaving town, no one ever suspects they were murdered.  The couple had a baby, Meg.  So, Pete and Ellen did not adopt her as an abandoned infant, Pete murdered Meg’s parents.

Ellen decides to burn the red house down, to end Pete’s obsession.  However, Teller fires at her.  Although he meant only to scare her, he hits and kills her.  Meg finds Ellen’s body and calls the police and Nate.  Pete takes Meg to the red house, where he starts calling her Jeannie.  Pete has completely lost it, and thinks Meg is Jeannie, leaving him again.  He begins choking her.  Nate and the police show up in time.  Pete takes off in his truck, but drives into the river, where he drowns.  Teller is arrested for killing Ellen.

The movie ends with Nate and Meg days later, talking about starting a new life together, as they watch the smoke from the red house.  Nate has burned it down to put it in the past. 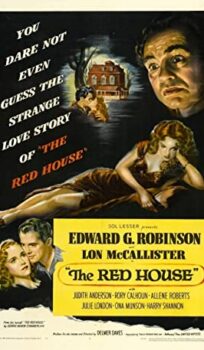