Six friends from London go vacation together. They rent a boat from a Marine Operator named Croker. They get lost in a seemingly neverending marsh full of reeds.

Strange things start happening, the friends start dying one by one.

Near the end of the movie you see that Croker had shot and killed a group of teenagers decades earlier becuase the teenagers were destroying his property. One of the teenage girls he had killed was the mother of Laura, one of the six friends lost in the reeds. Laura confronts Croker who explains that ever since he killed her mother the teens ghosts have returned and haunted him daily; he has tried to kill himself several times to put an end to the torment but the ghosts won’t let him die. He thinks that if Laura kills him the torment will end.

The end of the movie shows Laura and her “blind date” (one of the 6 friends) driving away from the marina, implying she killed Croker.

Just when you think they are safe you realize they didn’t kill Croker, he killed them and they are doomed to repeat the same murderous day over and over again, just like her mother (the teen ghost). 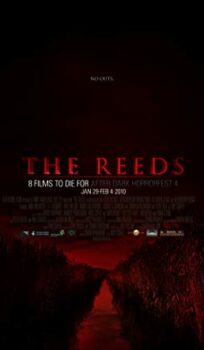