Stevens the butler (Anthony Hopkins) served Lord Darlington faithfully all his life. He even passed up a chance at love with Sally Kenton (Emma Thompson), because he believed Lord Darlington’s diplomatic work was vitally important, and felt that in a small way, he was helping shape world affairs by working for the great Lord Darlington. In his obsession with serving Lord Darlington, Stevens pushed Sally into the arms of Tom Benn, a different nobleman’s butler.

What Stevens didn’t understand was that Lord Darlington was not a brilliant diplomat but a well-meaning dolt. Though Darlington saw himself as a champion of peace, he was actually supporting policies that strengthened Adolf Hitler.

After World War 2, Lord Darlington was scorned as a traitor by everyone in England. His only relative, his godson Cardinal (Hugh Grant) had been killed during the war, so Darlington died a broken, lonely man. His mansion, which had fallen into disrepair, was bought by the American Congressman Lewis (Christopher Reeve), who kept Stevens on as his butler.

Stevens remained in touch with Sally by mail. He learns that she has broken up with her husband Tom Benn, so he travels to Brighton to see her, hoping he can persuade her to return to Darlington Manor to work with him again. But before he can get there, she meets her ex-husband Tom. He tells her their daughter is pregnant, and asks her to come back to him. When Stevens finally sees Sally, he learns that she intends to stay in Brighton with her husband.

Stevens returns to Darlington Manor, realizing sadly that he has wasted his life, and that he’s probably destined to spend his few remaining years alone. 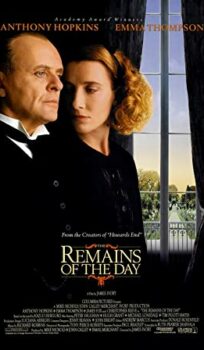