Fortune hunters and con men Miguel and Tulio (Kenneth Branagh and Kevin Kline) stumble into legendary El Dorado, city of gold, where they are mistaken for gods. They play along and use this to their advantage. Tulio falls in love with Chel (Rosie Perez) while Miguel falls in love with the whole city and its people. They begin to bicker about what their goals really are.

The high priest Tzekel-Kan (Armand Assante), threatened by his loss of stature and influence, grows suspicious and discovers that the two are actually men, not gods. He calls up some demonic creatures to kill the imposters but gets washed down river in the battle. He encounters the army of Cortez (whom Tzekel-Kan mistakes for a god) and vows to take him to the city of gold so they can eliminate the charlatans.

The only way to block the approaching army from the city is to take a ship (loaded with gold) meant for Tulio and Chel’s getaway and ram it into some huge stone pillars, collapsing them and walling up the city. Miguel joins Tulio and Chel at the last minute, and the plan works although the ship is destroyed and all the gold lost in the water. Tzekel-Kan leads Cortez to an entrance that is no longer there, so Cortez orders him into chains and marches onward, as the three heroes watch from a distance and wave farewell to the incredulous, protesting priest.

The three ride off on the horse Altivo for their next adventure. 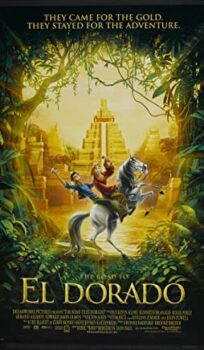