Pooper
The parish is not a peaceful place, “Father” forces all members to kill themselves and their children by drinking poison.  Caroline poisons her brother and sets herself on fire and Father shoots himself in the head. Sam and Jake make it out alive to tell the story.

Longer Version:
Two VICE television crew members Sam and Jake join their friend Patrick to document him finding his estranged sister Caroline who lives in a secretive commune called “The Parish” which is run by a man called “Father”. They interview members who are all happy but then meet a mute girl and her mother who are scared and won’t talk. After interviewing the manipulative “Father” at a community gathering, the mute girl brings Sam a note that’s says “please help us”. They are spooked and find others who tell them they are terrified but Father won’t let them leave.

The next morning, they see people trying to leave and armed parish people forcing them to stay. Sam promises he will take the mute girl and her mother away and sends Jake to ask the helicopter if they can. Jake and the pilot are shot at and Jake runs into the woods.

Back at the parish things escalate and Sam is taken. Father then rallies everyone to drink poison and kill themselves.

Jake makes it back to camp and finds everyone dead, then finds Caroline who has killed her brother Patrick and is setting the place and herself on fire.

Jake finally finds Father and Sam and sitting in his house. Father blames them for everything, and then kills himself.

Sam and Jake make it back to the helicopter and escape. 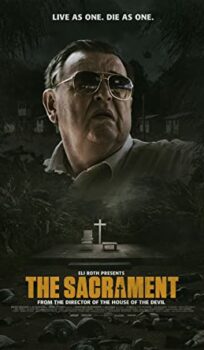