Even though Scott’s (Tim Allen) transformation into Santa Claus is against his will, his ex-wife Laura (Wendy Crewson) and her husband Neil (Judge Reinhold) think he’s changing his appearance in order to make Charlie (Eric Lloyd) like him. He ends up having his visitation rights suspended. When Scott defies the court order and visits Charlie at Thanksgiving, Charlie hands him the snow globe Bernard (David Krumholtz) gave him on Christmas the year before to help him remember their trip to the North Pole, and it works. Scott finally accepts becoming Santa Claus. He wants to say goodbye to Charlie alone, but when Laura and Neil leave Bernard shows up, and Charlie ends up leaving with them despite Scott wanting him to stay with his mom and Neil. Scott is charged with kidnapping Charlie, and the police begin looking for him.

Scott/Santa does the rounds on Christmas Eve with Charlie, but when they stop at their house Scott is arrested in a sting operation. After Judy the elf (Paige Tamada) tells Bernard that Santa is not responding to her calls, Bernard deploys the Effective Liberation Flight Squad (E.L.F.S.) to investigate. The E.L.F.S. hook up with Charlie, left on the roof of his house, and together they bust Scott/Santa out of jail. Scott/Santa returns Charlie back to Laura and Neil, and when Scott decides to leave, Charlie wants to go with him. Scott says he’d rather he stays with his mom and Neil, but this time is more insistent. He says he can’t be selfish, that he can’t have him all the time. Charlie eventually starts crying, saying he couldn’t be selfish either, but Scott reminds him that he gave him a wonderful gift, the gift of being Santa, and he believed in him when nobody else did. Laura, touched by all this, burns the custody papers, saying Scott could come and see Charlie any time he wanted. Bernard shows up and tells Charlie that if he ever wanted to see his dad, no matter what day or what time of day, all he had to do was shake the snow globe.

The police show up to the house, but Scott/Santa is already leaving, and the police and the gathered crowd outside see him in his sleigh. Before departing, Scott gives Neil the Weenie Whistle he wanted when he was 3 but never got, and Laura the Mystery Date game she never got as a girl. A little while later, when the police and the crowd have dispersed, Charlie shakes the snow globe, but Scott doesn’t come. As he is about to go back inside, Scott finally appears. He asks Charlie if he wants to go for a quick ride, and with Laura’s approval, they both board the sleigh and ride off into the night sky. 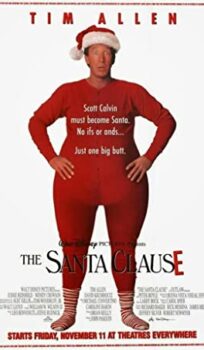