When Fiona’s mother dies, her father sends her to live with her grandparents.

The grandfather is a fisherman, and their family lives on the coast, across from the island of Roan Inish. Little by little, Fiona (Jeni Courtney) learns the family history.  The family lived on cottages on Roan Inish, but were forced to move to the mainland.  Fiona has a younger brother who was a baby.  His wooden cradle floated out to sea with him in it, while they were loading the boats to leave Roan Inish.  He was never found.

Fiona’s uncle tells her that her great great grandfather married a Selkie, a seal that can turn into a human.  He believes Selkie blood runs in their family.  Fiona’s cousin Eamon also lives with the grandparents.  Fiona and Eamon become obsessed with Roan Inish, and go out there on their own to clean and repair the homes on the island.  Fiona sees a wild boy living on the island.

The landlord tells them they have to move out.  Fiona tells her grandmother of the boy she has seen. Grandma immediately loads the boat, and they go to Roan Inish.  They settle into the home that Fiona and Eamon have repaired.  The little brother returns to them.  Because of the blood link between the family and the Selkies, the Selkie did not want them to leave Roan Inish.  The boy was raised by the seals, until the family returned to Roan Inish. 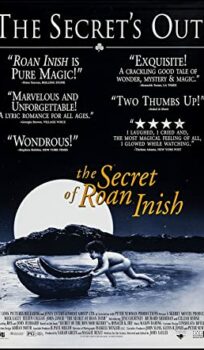