For a long time, Desmond “Dessie” Curley (Colm Meaney) is horrified and embarrassed that his unmarried daughter Sharon (Tina Kellegher) has become pregnant and plans to keep her baby. He’s even more angry that she won’t tell anyone who the father is. Everyone in the neighborhood gossips about Sharon, and speculates as to who the father is. This infuriates and humiliates Dessie, who takes it all out on Sharon.

For a long time, she isn’t sure who the father is. Eventually, she remembers that she had gotten drunk one night, and unknowingly had sex with one of Dessie’s drinking buddies- the foolish, repulsive, married George Burgess. When George finds out Sharon is pregnant, he begins stalking her- not menacingly, but pathetically. He begins to profess love for her, which both amuses and disgusts Sharon.

Dessie treats Sharon coldly and cruelly for a long time. Eventually she puts her foot down and demands that Dessie support her or she will move out. Dessie relents, and promises to do all he can to help her. He begins reading all kinds of books about childbirth and female anatomy. In the process, he learns about things like the clitoris and the G-spot; this makes him a much better lover. So much better that his wife slaps him the next time they have sex! She assumes he must have learned about such things by sleeping with other women.

When Sharon gives birth to a healthy baby girl, Dessie and the family celebrate ecstatically. And Sharon gets a last bit of revenge on George Burgess by naming the baby Georgina. 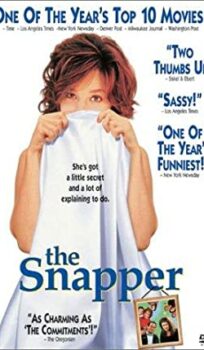