A cop who was killed in the line of duty (Gabriel Macht) comes back from the dead to fight crime as a masked man named The Spirit.

After finding out that his nemesis The Octopus (Samuel L Jackson) gave him his powers by using him as a test subject for a serum he was developing, The Spirit decides it’s time for both of them to finally die.

When Sand Saref (Eva Mendes) and Silken Floss (Scarlett Johansson) meet at the projects to exchange the stolen artifacts they have, the deal goes bad and turns into a gunfight. The Spirit shows up and fights with The Octopus, who tries to gain immortality by drinking the blood of Heracles. Sand stops it from happening by shooting the vase containing the blood. The Spirit then pulls out a large grenade, pulls the pin and jabs it into The Octopus’ stomach. Sand saves The Spirit’s life by shielding him from the explosion using the Golden Fleece.

Sand and The Spirit kiss, then say goodbye to each other. Meanwhile, Silken Floss finds that one of The Octopus’ fingers has survived the blast and is still alive. She takes the finger and indicates that she’ll use it to bring him back to life. 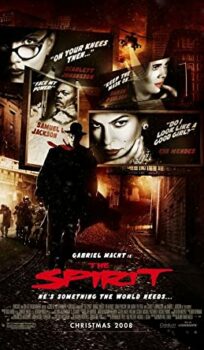