Pooper:
Han and Chewbaca make it to Chewbacca’s home and kill the Storm Trooper holding his family hostage. Then Han and the Wookies attend their Life Day ceremony, joined by Luke, Leia, C-3PO and R2-D2.

Long Ending:
Rebellion fighters Han Solo (Harrison Ford) and alien of the Wookie species Chewbacca “Chewie” (Peter Mayhew) are trying to fly to Chewie’s home so he can celebrate a holiday called Life Day with his family. However, they keep running into the forces of the evil Empire’s fleet. Chewie’s family – father Itchy (Paul Gale), wife Malla (Mickey Morton), and son Lumpy (Patty Maloney) – grow more concerned at Chewbacca’s delayed arrival as they know he is wanted by the Empire. They try to distract themselves, with Malla watching a cooking show teaching her how to make a stew out of Bantha meat, Lumpy watching holographic acrobats, and Itchy engaging in a flirtation with a virtual reality chanteuse (cameo by Diahann Carroll). They call Chewie and Han’s friends and rebel allies Luke Skywalker (Mark Hamill), R2-D2, Princess Leia (Carrie Fisher), and C-3PO (Anthony Daniels), but they have no news.

Empire commander Darth Vader (voiced by James Earl Jones) directs his forces to shut down the planet and be on high alert. An Imperial Guard Officer (Jack Rader) and several storm troopers come to Malla’s house and begin searching it. A local trader (and secret Rebel volunteer) named Saun (Art Carney) also comes by to try and help protect Chewie’s family. While waiting for the Empire’s forces to leave, the wookies watch a music video (cameo by the band Jefferson Starship), watch a cartoon (featuring the first appearance of Boba Fett – voiced by Gabriel Dell and Don Francks), and observe a bartender named Ackmena (cameo by Bea Arthur) shut down the Mos Eisley cantina under the orders of the Empire. Eventually, Lumpy is able to construct a device (cameo by Harvey Korman – who plays multiple roles in the special), allowing him to hack the Empire’s radio comms and issue a fake order to the Imperial forces to leave their home. The Officer leaves but stations one Storm Trooper at the house.

The Storm Trooper eventually uncovers Lumpy’s ruse and is about to shoot the family when there is a knock at the door. Chewbacca and Han have finally arrived and they fight the Storm Trooper. During the struggle, the Storm Trooper is tripped and falls over the balcony into a hundred-foot gorge and dies. Saun is able to radio the Officer and convince him the Storm Trooper robbed the wookies and then abandoned his post. Chewie embraces his family, and the group then leaves to attend their Life Day celebration.

Chewie, his family, and his neighbors don red robes and go to a secret location. There, they are greeted by Luke, C-3PO, R2-D2, and Leia. Leia sings a song, and the wookies and their friends celebrate Life Day. 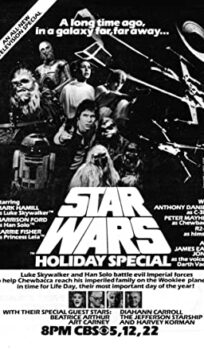