POOPER:
Lonnegan tells Macalinski that Hooker is conning him. Macalinski then gets his bet changed from Hooker to Torres, but then Hooker wins the fight. Thinking that Lonnegan was the conman, Macalinski has him killed. Later, Veronica reveals that she is Gondorff’s daughter, and she and Hooker kiss.

LONG VERSION:
Lonnegan (Oliver Reed), the victim of the con from the first movie, wants revenge on Gondorff (Jackie Gleason) and Hooker (Mac Davis). He kills Kid Colors, one of the members of Gondorff and Hooker’s group of conmen, and pins the murder on local gangster Macalinski (Karl Malden). He does this so Gondorff and Hooker will go after the wrong guy, and after Macalinski eventually kills them, Lonnegan will have his revenge and leverage over a competitor. Gondorff knows that either Lonnegan or, more likely, Macalinski was responsible for the death of Kid Colors, so he and Hooker reassemble the rest of the gang to pull off another con on the man he thinks is responsible for the murder. Joining them is Veronica (Teri Garr), a fellow con artist who turned the tables on Hooker when he previously attempted to con her.

The con will have Hooker pretending to be a boxer who is ordered by his manager Gondorff to take a dive in his next fight against Torres, the Puerto Rican champion. Hooker goes to Macalinski, claiming that he is tired of taking a dive for his manager and wants to get back at him. He convinces Macalinski to bet heavily on him in his next fight because he plans on winning instead of taking the dive, which will bankrupt Gondorff, and they’ll split the winnings 50/50. Macalinski is leery of Hooker, thinking he might be getting fooled, but after he watches Hooker win a fight, he’s convinced Hooker is for real and agrees to the bet. But he doesn’t know that the fight was fixed by Gondorff and the gang.

The night of the fight arrives, and it appears that Hooker is going to lose. Lonnegan, sitting behind Macalinski, tells him that Hooker is part of a group that is conning him, and he was planning on taking the dive all along. Macalinski then goes to the booker who took the bet (who is actually part of Gondorff and Hooker’s group) and gets him to change the bet from Hooker to Torres. Once the new bet is taken, Hooker knocks out Torres, and Macalinski thinks that Lonnegan is the actual conman, not Hooker. Later that night, Macalinski and his men trap Lonnegan in his car, and it’s implied that he is killed. It’s also revealed at this time that Torres was in on the con, as he got paid off by Gondorff to take a dive.

With the con completed, the group begin to go their separate ways. Just before they’re about to board the train for home, Hooker asks Gondorff how he knew Lonnegan was responsible for Kid Colors death, since he originally said that he thought Macalinski did it. He says that he had a spy in Lonnegan’s camp…Veronica. Gondorff hired her to watch Lonnegan and to let him know when he would begin to follow through on his revenge. He knew that Macalinski had nothing to do with the murder, but wanted to con the gangster anyway. He then had Veronica watch over Hooker, so she would get in his good graces when it was time to start the con. Hooker then asks for his share of the money, and Gondorff says he gave it to Veronica, who was going to meet them at the station, so he should wait there for her. Gondorff then boards the train and it starts to leave the station. Just as Hooker begins to think that he was conned by Veronica again (and possibly Gondorff as well), the train stops and Veronica gets off. She goes to Hooker and tells him her father would never con him and she has his money. Yes, Veronica is Gondorff’s daughter, and the movie ends with them kissing. 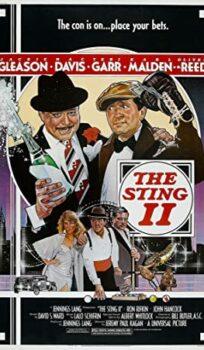