Colonel Spears (Paul Sorvino) gets Mo (Michael Moriarty), Nicole (Andrea Marcovicci), and Jason (Scott Bloom) out to one of his radio stations in Atlanta, and there they send out a broadcast on radios across the nation warning people about the Stuff. That, combined with a TV broadcast Nicole makes, somehow makes the people believe it is indeed a deadly dessert. The Stuff is withdrawn from distribution, and then the nation rallies together to destroy it, the stores that sell it, the factory that prepared it for selling, and the mine where it was discovered.

Mo then visits the Stuff’s company head Vickers (Danny Aiello). He tells Mo that the destruction of the mine has not hurt his business, since the Stuff seeps out from many places in the ground, but Mo vows to find those places and get rid of them. Vickers brings in Fletcher (Patrick O’Neal), the ice cream mogul he’s now working with (and who originally hired Mo to find out about what the Stuff was), and they tell him they have come up with a new product called The Taste, which is a mix of ice cream and 12% of the Stuff, enough to make people crave for more without taking over their minds or killing them.

However, Mo then brings in Jason, who is carrying a box, and then he holds the two moguls at gunpoint. The box is full of pint containers of the Stuff, and Mo forces them to eat it all, as punishment for the lives lost to it (including Jason’s family) and for their greed. When they finish, Mo and Jason leave.

The movie ends with someone selling the Stuff on the black market…. 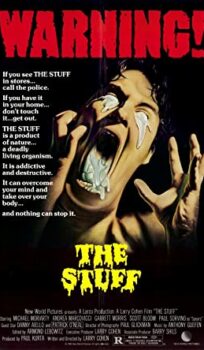