POOPER
Lou Jean and Clovis, along with Officer Slide, make it to Sugarland.  Clovis is shot when they get to the foster home, and they attempt to flee to Mexico.  Clovis dies just yards from the border, and Lou Jean is arrested.  After spending 15 months in prison, she is awarded custody of baby Langston.

LONG VERSION
Based on a true story, Lou Jean Poplin (Goldie Hawn) has just been released from prison, only to find out her infant son Langston has been placed in a foster home and is about to be adopted.  She goes to the prison where her husband Clovis (William Atherton) is being held, and even though he only has four months left on his sentence, she convinces him to break out and together they will go to the foster home in Sugarland, Texas and get their child back.  Once they get out, they hitch a ride with an elderly couple, who promptly get pulled over for going too slow on the highway by Texas Department of Safety Officer Maxwell Slide (Michael Sacks).  The older couple get out, and as Officer Slide is preparing to write them ticket, a nervous Lou Jean gets in the driver’s seat and steals the car, with Officer Slide in pursuit.  The chase lasts for several miles until Lou Jean crashes in a field.  As Slide is checking on them, Lou Jean gets his gun away from him and she and Clovis take the police car, with a kidnapped Officer Slide driving.

When TDPS is unable to get Slide on the radio, other officers begin to look for him.  One finds him, but is threatened by Lou Jean, now holding Slide’s shotgun.  With word spreading that Slide is being held hostage by two fugitives, the TDPS begins pursuit, led by Captain Harlin Tanner (Ben Johnson).  Tanner is talking on the police radio, trying to negotiate with the fugitives, when he learns their names and why they took Slide hostage.  The media soon learn of the pursuit and of the Poplins, and they quickly join the chase.  Meanwhile, the police have gone to the foster home where baby Langston is at, and they notify the foster parents of what is happening, with the media appearing shortly thereafter.

The chase nearly comes to an end when Slide’s police car runs out of fuel, but Lou Jean and Clovis get Captain Tanner to push their car with his to the closest gas station and fill up their tank.  The pursuing vehicles also fill up their tanks, and the chase resumes.  Later, Lou Jean has to use the restroom, so they get Tanner to call in a porta-potty on a truck to meet them at the side of the road, but Clovis suspects it might be a trap.  He’s right, and he gets the policeman hiding inside the porta-potty to leave before he allows Lou Jean to use it.  They later get Tanner to let them stop at a fast food restaurant to get something to eat.  At this time, a pair of Texas Rangers have joined the pursuit, and they tell Tanner that they are both sharpshooters and they can take out the Poplins without hurting Slide.  Tanner won’t allow them to take the shot, but will have them do so if it becomes necessary.  With night falling, an overzealous patrolman tries to end the pursuit by crashing into Slide’s car, but he misses and takes out Tanner’s car, which in turn causes every car in the chase to crash, and that allows the Poplins to get away.  While Tanner calls in a helicopter to continue the chase, Lou Jean and Clovis order Slide to hide in a used car lot so they can get some sleep, but they handcuff him to the backseat so he can’t get away or use his radio.

With the Poplins sleeping in an RV parked on the lot, Captain Tanner has brought in Lou Jean’s father, with the hope that he can persuade her and Clovis to turn themselves in.  He gets on the police radio, and he says that he’s disappointed with her, and he would shoot her and Clovis if given the chance.  She doesn’t hear that, but Slide did, and now he realizes that Lou Jean isn’t a bad person, just a person with a bad upbringing.  The next morning, two Texas National Guardmen come across the Poplins and begin shooting at them.  Tanner and the cops arrive and arrest the duo, and they let Lou Jean and Clovis know that he will allow them to go the rest of the way to Sugarland without any interference and will let them get their baby.  After they leave, he tells the Rangers he has no intention of allowing them to get the baby, and they are to go to the foster home and be ready to shoot them.  He then calls the foster parents and orders them to take Langston to the courthouse, where they will be protected.

As the chase continues, Tanner asks Clovis what their plan is once they have the baby.  He says that Lou Jean has a cousin in Mexico, and they will live with her.  When the chase gets closer to Sugarland, hundreds of onlookers appear on the side of the road showing their support of the Poplins, and they are genuinely moved by the gesture.  They now believe they will get baby Langston, since the state of Texas is on their side.  Once they get to Sugarland, Tanner tells them the police will stay back and that the baby is at the foster home.   As they pull up to the house, both Slide and Clovis realize it’s a trap, but Lou Jean is so anxious to get the baby that she make Clovis go and get him.  As Clovis gets out of the car, one of the Rangers shoots him.  Clovis gets back in the car and they race to Mexico, but as they approach the border, the US Border Patrol is waiting for them.  They shoot at the car, which breaks down just yards from the border.  Captain Tanner arrives shortly thereafter to arrest the couple and to check on his patrolman.  Clovis has died from his wound, and Lou Jean is in shock over his death and her failure to get their baby.  Tanner then goes to Slide and tells him he did a good job, considering everything that has occurred.  The movie ends with title cards that state the Lou Jean was sentenced to five years in prison for their actions, but was paroled after just 15 months.  Afterwards, she was able to convince the state that she would be a good mother to Langston, and the state agreed to cancel the adoption and awarded her custody. 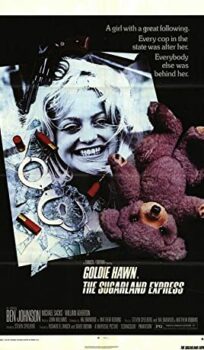