POOPER:
The Thinker is using Starro the Conquerer to overthrow the world. Waller’s second Task Force X stops and kills them, leaving only Bloodsport, King Shark, Rat Catcher 2, and Harley Quinn still alive.
Peacemaker kills Rick Flag before Bloodsport defeats him. During the credits, Waller tells Peacemaker she may need him again.

Longer:
Amanda Waller recruits a Task Force X team to infiltrate a fortress known as Jotunheim on the island of Corto Maltese. She begins with Savant, and introduces him to Blackguard, Mongal, TDK, Weasel, and Rick Flag, with Captain Boomerang returning along with Harley Quinn. They are to locate The Thinker in order to find out what he is up to with Project Starfish, a secret experiment being funded by the corrupt military government. The team is airlifted to Corto Maltese and dropped in the water on the beach. Weasel immediately drowns as the rest make it to shore. Upon being made, the team hides and realizes how outnumbered they are. Blackguard steps out and tries to sell out their position, but has his face blown off as the assault begins. Seeing so much violence, Savant panics and attempts to swim away, but Waller blows his head open with a remote explosive charge. TDK, Mongal, and Boomer are taken out while Harley watches on in horror. She comes to Javelin as he is dying, and he begins to tell her something about his javelin but dies before he can. Harley is captured by the army while Flag manages to escape.

In a flashback, Waller recruits a second Task Force X. She starts with Bloodsport by leveraging his daughter, and introduces him to Peacemaker, Rat Catcher 2, Polka-Dot Man, and Nanaue the King Shark. They are informed of the other team’s arrival on the other side of the island and are given the same instructions regarding Jotunheim and Project Starfish. When the second team arrives, they save Flag and infiltrate what they think is a military base, but is actually an encampment for the rebels led by Sol Soria. She plots with them to overthrow the Corto Maltese president, who seized power in a coup orchestrated through project Starfish.

The president has Harley Quinn brought to him, where he proposes she work with him to use project Starfish to rule Corto Maltese and eventually more. Though intrigued, Harley knows a joker when she hears one, and shoots the president dead, making his general the leader. She is imprisoned and subsequently tortured with a cattle prod.

The surviving squad members await The Thinker’s arrival at a nightclub to pick up experimentation subjects. As King and RC2 capture The Thinker, the others surrender to find out Harley’s location. Once they have it, they crash the transport and plan the rescue. Harley manages to escape all on her own, and makes her way to them.

Once reunited, they converse with The Thinker and go into Jotunheim. The squad places explosive charges around the building, and eventually make it to the room holding Starro the Conquerer, a giant extraterrestrial Starfish that grows as it controls more minions by attaching a copy of itself to their face. This was the project The Thinker and the Corto Maltese had been behind. The Thinker tells them how the American government was playing a significant part in getting it done.

Flag takes a hard drive containing the evidence and threatens to deliver it to the press. Peacemaker reveals he was Waller’s double agent on this mission to make sure that information doesn’t get out. As he draws a gun on Flag, the bombs begin to explode without notice. As the building collapses, Starro escapes and takes on Corto Maltese a la Mr. Stay Puft. Rather than place him under mind control, Starro kills The Thinker for the decades of torture he endured, despite the fact that it helped him grow. Peacemaker kills Flag, but RC2 witnesses it and takes the drive. Bloodsport manages to arrive just in time to save RC2 from Peacemaker.

Starro walks around town, releasing more copies of himself to attach onto people to fall under his control. Though Waller tells Task Force X to stand down now that the mission is complete, the team decides to engage Starro. As Waller tries to activate the first explosive charge, she is knocked out by a member for project Cadmus while the rest watch on and guide the team. As difficult as it is hurt Starro, King is unaffected by his spores, and manages to tear off some flesh. Harley uses the Javelin to pierce Starro’s eye and Polka-Dot man uses his power to destroy one of Starro’s appendages. RC2 summons all the rats of Corto Maltese to invade the orifice of Starro’s eye, and the monster collapses on top of Polka-Dot Man, both dead. Bloodsport uses the drive to blackmail Waller into letting him, King, RC2, and Harley go free.

During the credits, we are shown that Weasel survived and that Waller has another mission for Peacemaker, who survived. 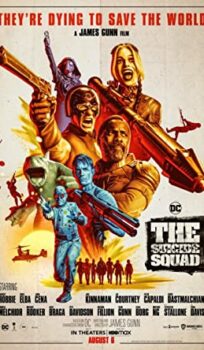