Afterwards, Robbie affirms his love for Katie, and Cowboy breaks up with his girlfriend Tiffany after he finds out directly from her that she had tried to seduce Robbie in order to throw him off his game so he (Cowboy) would retain his title and she could thus keep her A-list status in the park. However, by the time the park closes for the season, Tiffany’s attitude changes for the better.

LONG VERSION:
One day, Cowboy (Travis Perkins) and Tiffany (Cerina Vincent) watch Robbie (Randy Wayne) as he practices his surfing skills in the wave pool while being coached by Pipeman (Alan Thicke), and Cowboy recognizes how good he is and decides he needs to practice harder because Robbie might just be able to dethrone him as Surfer King at the Employee Olympics. However, Tiffany cannot bear the thought of potentially losing her A-list status in the park if he loses, so she starts to seduce Robbie to try to throw him off his game so Cowboy will retain his title. Robbie succumbs to her charms, which hurts the heart of Katie (Keri Lynn Pratt), another employee he already developed a connection with and had kissed. After she sees Robbie leave the park with Tiffany after his shift one day, she sits on a bench to brood over the apparent end of their budding relationship. Robbie’s mother Connie (Lindsay Wagner) then appears and asks for him since she was supposed to pick him up, and Katie tells her that Tiffany gave him a ride home. After Connie figures out that she is Katie, she sits with her and listens to her story regarding her and Robbie and how they appear to be over, and she comforts her.

After the first day of the Employee Olympics, the Lifeguards team has a one-point lead on both the Concessions and Grounds Crew teams, and Tiffany comes up to Robbie and says that she knows he will take care of the surfing competition tomorrow, but she wants to take him to a party tonight to celebrate early. He agrees to be picked up by her after work, and she tells him to call his mother and make up some story about him being with Alex (Ben Ziff). After Robbie tells Alex about this, Alex senses that Tiffany is up to no good and voices his concerns to Aokee (Gabriel Iglesias) that night. They then talk with Robbie about his plans and how Tiffany intends to make him so tired and crazy that he will lose the competition, and they inform him that she is still dating Cowboy and wants him to win. Robbie refuses to hear any of it, saying he knows what to believe and what not to believe, so – with Aokee’s permission – Alex hits him with a revelation: Aokee is actually an illegal immigrant from Mexico named Armando, who had come to the U.S. with his family ten years ago in order to escape from a drug lord that his father had crossed. He invented his Aokee identity by taking a deceased man’s name and getting a hold of his birth records and social security number so he would never have to worry about the Department of Immigration, and then he perfected a Hawaiian accent. Alex discovered who he really was when he hurt himself on the job and started swearing in Spanish, and Alex vowed to not squeal on him to anyone, and he then tells Robbie that he now wants him to do the same. Jarred by this revelation, Robbie goes home and forgets about the party. The next day, he shows up at the competition ready to surf, telling Alex and Aokee that he isn’t going to be like his father and run out on the people he cares about just because some gorgeous girl seduced him. He then goes up to Connie and Katie and tells Katie that they need to talk, but then the horn goes off to signify the start of the competition, and Connie says that he will have to take care of that first.

Robbie ends up tying with Cowboy for first place, and they are told that, in five minutes, they will be participating in a sudden death surf-off, where additional heats will be run until a winner can be determined. Robbie tells Alex, Aokee, and Pipeman that he will have to go all or nothing if he hopes to win and tells them of his plan to “pull the fin” and execute a backflip, which he is confident he can do because he did it once with a board that had a single fin and two foot pockets. Robbie has Pipeman create foot pockets out of duct tape and remove the two side fins on his board, then instructs him to create the biggest wave he can give him. Cowboy scores a 9 on his run, but Robbie’s pulls off his stunt flawlessly, earning him the first-ever perfect score of 10. He becomes the first Concessions team member to be crowned Surfer King, and with this victory, the Concessions team win their first Employee Olympics. Cowboy breaks up with Tiffany after she herself tells him about what she tried to do with Robbie, and he heads up to the victory platform and announces Robbie as the new Surfer King. Robbie takes Katie up to the platform with him, and after he collects his trophy, they share a loving embrace.

As the park closes for the season, Tiffany – now with a kinder attitude – drives up to Robbie, Alex, Katie, and Alex’s new girlfriend Amy (Rebecca Borash) and asks Robbie if he would consider becoming a lifeguard next season, but he refuses, saying that he likes working at Aokee’s. Eddie (Ryan Haug), a mentally challenged grounds worker, then approaches Tiffany and does a sweet little magic trick for her, and she offers him a ride home for it, but he instead gets in the driver’s seat and motors away with her. As they walk out of the park, Robbie apologizes to Katie for being a jerk to her, but she happily says that he will have plenty of opportunities to make it up to her since they’re going to the same high school. 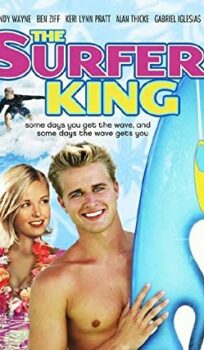