At the start of the movie, Neddy Merrill (Burt Lancaster), a fifty-something executive, is sitting around the pool at the home of some rich friends. The house sits on top of a mountain in the suburbs, and as Neddy looks down from the mountain, he sees dozens of rich people’s homes with swimming pools in their yards. Neddy’s own estate is at the bottom of the valley. From a certain angle, all the swimming pools seem to line up like a river, and Neddy has a sudden inspiration: he could run down through each yard, take a brief dip in each pool and, in effect, “swim” back to his house, where his beloved wife and young daughters are waiting for him.

In the beginning, Neddy is warmly welcomed and offered a drink at every neighbor’s home he passes through. All the neighbors seem to know and like Neddy. But over the course of the movie, we see more and more signs that something is wrong, and that Neddy’s life is not as happy or as prosperous as we had been led to believe. At each pool he passes through, the reactions and remarks of neighbors tell us a little bit more about Neddy’s life. We learn that his daughters are not as young as he’s been telling everyone. We learn that he’s unemployed, and has been shunning the efforts of old friends to help him find a job. We learn that Neddy and his wife were once regarded as snobs by their neighbors, but have lost a lot of money through bad investments.

At one house, Neddy meets his former mistress, a woman he dumped unceremoniously years ago. Neddy imagines that she still loves him, but she despises him, and tellingly, she says she won’t give him any more money.

Though Neddy is in good physical condition, he has been running and swimming a long time, and is becoming cold and extremely tired. He comes to a municipal public pool, but has no money to get int, as he’s wearing nothing but his swim trunks. He sees a caterer he used to hire, and begs for the money. The caterer gives Neddy some spare change, and Neddy swims a lap in the public pool. But while he’s there, he sees that the caterer, some local merchants, and their wives are mocking him. They complain that Neddy and his family always lived beyond their means and regularly wrote bad checks to pay for their services. The caterer’s wife alludes to run-ins that Neddy’s teenage daughters had with the law, and blames Neddy for being a lousy father.

Neddy has no memory of financial troubles or of his daughters’ problems with the law. He seems to believe he has a perfect family and a happy life, and can’t understand what the people are talking about. He insists that his daughters love and respect him. The caterer coldly tells him that his daughters regarded Nedddy as a joke.

Desperately, Neddy runs from the public pool, and gets to his own estate just as it starts to rain. The estate is in shambles and it looks as if no one has lived there in years. Neddy tries to open the door, but his house is locked and empty. It appears that Neddy is a an alcoholic and a broken man. He has lost his job, his family, his friends, his lifestyle, his home and his sanity, but cannot or will not see that. Neddy is an old man, alone and half-naked, crying, unable to get out of the rain. 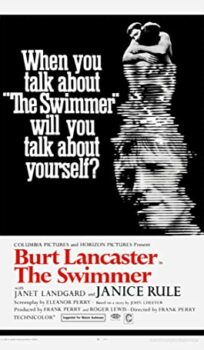