The Theory of Everything(2014)

The story depicts the life of Stephen Hawking, the theoretical physicist, starting with his time in college where he meets the love of his life, Jane.

Stephen (Eddie Redmayne) is shown to have a brilliant mind and is adored by his professors for his well-thought out theories on black holes.  This is disrupted when he learns he has Amyotrophic Lateral Sclerosis which will eat at his muscles despite his brain remaining in tact.  Jane (Felicity Jones) stays committed to him nonetheless, even if his life will be short; they marry, have children, and he gets his PhD.

He starts to write what will become “A Brief History of Time” but the ALS starts to take effect and he must use an electric wheelchair; he also loses his ability to speak after having a tracheotomy.  Stephen adopts a speech-generating device to communicate and is taken care of by a live-in nanny, who he falls in love with, while Jane spends more time at church, where she falls for the choir leader.

They amicably end their marriage as they never expected Stephen to persevere as long as he did which requires her to give up her life to take care of him — nonetheless, they remain friends and Stephen continues to prosper today as an esteemed author and physicist. 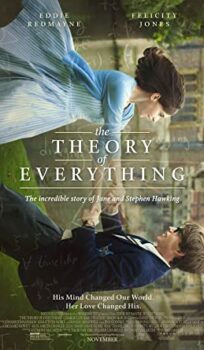