After being teased and accidentally falling into a barrel of toxic waste, nerdy loser Melvin (Mark Torgl) becomes the Toxic Avenger (Mitch Cohen), a monstrous super hero. Toxie kills the two preppy guys who teased him and maims and embarrasses their girlfriends. He then kills a number of different criminals in several comically gruesome fashions. Finally, the corrupt mayor of Tromaville tries to get the national guard to kill Toxie, framing him as a monster. The town of Tromaville shows up to support Toxie, however, and he disembowels the mayor. He, his blind girlfriend, his mother, and the town of Tromaville all live happily ever after…until The Toxic Avenger Part II. 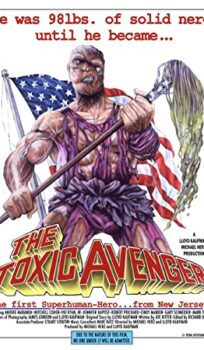