Short pooper:
Abbie, Hayden, Dellinger, Rubin, and Davis only get five years, instead of the ten the Prosecution was hoping for, guilty of incitement to riot; there is a subsequent, but unsuccessful, attempt to an appeal. Bobby Seale, having had his case thrown out as a mistrial, is also cleared of what turned out to be a false charge of murdering a cop in Connecticut. The whole case looks to have clearly been a politically-motivated one since it was all but proven that the Chicago Police were the ones who instigated the riots and Judge Hoffman went to great lengths to tamper with witnesses, jurors, and overall procedures throughout the trial.

Longer version:
After Judge Hoffman (Frank Langella) shamelessly botches the attempt to have the testimony of Ramsey Clark (Michael Keaton) thrown out, because it seemed to show that the Chicago Police Department were the ones who kickstarted the riots between themselves and the anti-war protesters at the Democratic Convention, Kunstler (Mark Rylance) shows the defendants a recorded tape that seems to show Hayden (Eddie Redmayne) as an instigator of the whole chaos, which both him and Abbie (Sacha Baron Cohen) deny. A mock cross-examination takes place, parallel to scenes from the congregations around the Convention grounds; it is revealed that Hayden’s words had been taken grossly out of context, all along (he exclaimed, enraged: “If OUR BLOOD is gonna flow, then let it flow all over the city!!”, after Davis was injured while trying to placate a dispute over a boy trying to raise a flag; yet, the OUR part was misunderstood and overlooked). The situation escalates to the group trying to storm the hotel, but getting cornered from all sides by the cops, who finally remove their tags and badges and viciously attack them.

Abbie agrees to testify, since, due to the misconstruing of Hayden’s words, he would be ineligible to do so. While on the stand, Abbie vouches for Hayden, expresses his disgust for “the great system being run by the worst people” and effectively turns around the questioning by Prosecutor Schultz (Joseph Gordon-Levitt). It is to be noted that Schultz himself had, by this point, started to have doubts about the validity of the entire process.

After 151 days of trial, when the verdict is to be decided, Judge Hoffman gives Hayden a chance to deliver a closing statement and “promises that, if Hayden keeps it as brief, respectful and non-partisan as he himself has been throughout the trial, he’ll give him a lenient sentence”. However, Hayden takes the opportunity to read the names of the almost 5,000 soldiers killed in action in Vietnam; this prompts many of the present -including Schultz, who does it “out of respect for the fallen”- to stand up, raise their fists and cheer, despite Hoffman’s frantic attempts to maintain order.

Title cards, prior to the film’s end, inform that Abbie, Hayden, Dellinger (John Carroll Lynch), Rubin (Jeremy Strong), and Davis (Alex Sharp) were sentenced to five years for the charge of inciting a riot, with an unsuccessful appeal attempt and the Prosecution refusing to re-trial; Bobby Seale’s supposed conviction of murdering a cop in Connecticut turned out to be false; Kunstler was charged with 24 counts of contempt; Judge Hoffman was vilified by the local law community and not given any further cases to preside; Rubin went on to become a successful stockbroker but was killed in a hit-and-run incident in 1994; Abbie wrote the notorious best-seller “Steal This Book” and committed suicide in 1989; and Hayden became a Senator for California, being re-elected six times afterward. The recurrent motto “THE WHOLE WORLD IS WATCHING” is overheard as the movie ends. 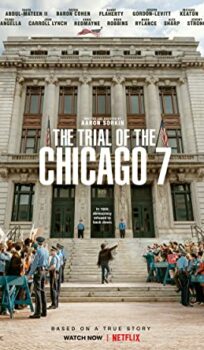