Submitted by Evan B (Long) and Curt (Pooper)

LONG VERSION:
The film opens with Dean Keaton (Gabriel Byrne) being shot to death on a boat by a man (whose face is not seen) named Keyser Söze. Soon after, the boat explodes. We flash forward to a man with physical disabilities (a limp and paralyzed arm) named Verbal Kint (Kevin Spacey) being interrogated by law enforcement officers Dave Kujan (Chazz Palminteri) and Jeff Rabin (Dan Hedaya). It turns out that Verbal was on the boat the night it exploded, though he escaped without injury. Verbal received immunity from prosecution after explaining the night’s events to the DA’s office, but Kujan wants to go over the story once more. Meanwhile, officer Jack Baer (Giancarlo Esposito) is trying to question  the only other survivor from the boat explosion, a badly injured and non-English speaking Hungarian sailor.

Verbal tells Kujan that everything started when he was brought in to take part in a lineup along with several other of the police’s usual suspects in relation to a heist that none of the suspects committed. The group of suspects included tough guys Fenster (Benicio del Toro) and McManus (Stephen Baldwin), explosives expert Hockney (Kevin Pollack) and ex-corrupt cop Dean Keaton. Keaton’s girlfriend (and attorney) Edie manages to get the police to release all of the suspects due to the lack of evidence. Though Keaton is trying to live a law-abiding life due to his love for Edie, the arrest convinces him that the police will never leave him alone. Verbal turns out to be a brilliant criminal planner and convinces the other suspects, including Keaton, to join him in some low-level criminal activities as a form of “revenge” against the cops.

Ultimately, the group inadvertently steals a bunch of drugs. The drugs belong to an almost-mythical crime boss named Keyser Söze. The legend is that Söze is a sociopath, and that when his wife and children were taken hostage by another crime boss, Söze killed his own family to eliminate the possibility of it ever happening again. Söze’s attorney, a man named Kobayashi (Pete Postlethwaite), approaches the group and offers to let them go unpunished for stealing Söze’s drugs if they agree to destroy a rival crime boss’ drug shipment. The group initially declines. But after finding out that Söze has files of all the criminal acts they have ever perpetrated, an unsuccessful assassination attempt on Kobayashi (who the group believes is actually Söze) and the murder of Fenster by Söze’s thugs, the group agrees to the mission.

The night of the mission, Keaton and McManus storm the rival drug boss’ ship, killing sailors and bodyguards thereon. Due in part to his crippled body and in part to his own cowardice, Verbal simply hides on the boat to wait out the night. Hockney plants a bomb on the boat, but is shot and killed soon thereafter by an unseen assailant. McManus and Keaton soon learn that there are no drugs on the ship. Meanwhile, the unseen assailant murders a man who was hiding in the ship. Keaton goes on deck to meet McManus, but discovers that McManus has been fatally stabbed in the neck. The assailan in a trenchcoat and hat (implied to be Söze) then emerges and attacks Keaton. Keaton notices Verbal hiding and motions for him to get off the ship while Söze is distracted. Verbal flees, but not before hearing shots fired, apparently killing Keaton. The boat explodes shortly thereafter. Verbal blames the entire escapade on Söze.

Kujan belittles Verbal and explains that Keyser Söze doesn’t exist and the entire series of events was put into place by Keaton. He says that the man in hiding on the ship was an informant who was going to give police Söze’s identity as one of the few people who had met Söze in person. Kujan believes that the description would have matched Keaton, who used the legend of Söze to hide his own identity. He notes that Keaton’s girlfriend Edie was representing the informant and had likely passed the information of the informant’s whereabouts along to Keaton (not realizing Keaton was Söze). He says that Keaton set the entire series of events in motion just to get onto the ship and kill the informant. Verbal never saw Söze actually shoot Keaton from his vantage point. Kujan believes that Keaton intended for Verbal to witness a faked death to give him the cover needed to flee the country without being pursued. Kujan releases Verbal from custody, disgusted at how easily manipulated Verbal has been.

As Verbal limps away from the station, Kujan and Rabin discuss the case further. An offhand comment by Rabin gets Kujan to realize that Verbal had embellished his story, using names and locations in his story he saw from various documents and objects throughout the room (for example, “Kobayashi” was the name of the manufacturer of the coffee cup that Verbal was drinking from). He then receives a fax from Baer of a sketch of Keyser Söze based on a description given by the injured sailor. The drawing matches that of Verbal Kint! Outside, we see Verbal begin walking with no limp and using his crippled arm with no problem. Verbal steps into a car driven by “Kobayashi.” Kujan runs outside to find Verbal, but narrowly misses him as Verbal is driven away. A line Verbal used earlier ends the film – “the greatest trick the devil ever pulled was convincing the world he didn’t exist.” 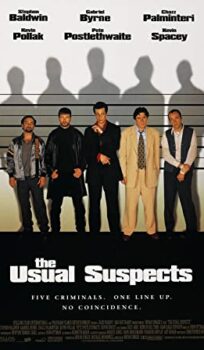