Pooper:
Yakov defeats the Mazzick and also frees Mr. and Mrs. Litvak from its curse. Although defeated, the Mazzick is still alive at the end.

Long Ending:
Yakov (Dave Davis) is an Orthodox Jew that recently left his community after experiencing a traumatic event. He attends a support group with other Orthodox Jews that left the community and ends up agreeing to go on a date with one of the other members. After the meeting, one of Yakov’s former friends Reb Shulem asks Yakov to work as a shomer – a person who reads prayers over the corpse of a recently deceased Orthodox Jew and keeps their soul safe from evil. Though hesitant, Yakov is desperate for money and agrees to the job.

He arrives at the home of the Litvaks, where husband Rubin recently passed away. Mrs. Litvak (Lynn Cohen) begrudgingly allows Yakov into her home to watch over Rubin’s dead body. Yakov learns that Rubin was a Holocaust survivor whose original family had been killed in the Holocaust and that he only married Mrs. Litvak after he emigrated to the US. Throughout the night, Yakov sees ghostly apparitions, is taunted by a demonic spirit and watches as all the lights go out.

Eventually, Mrs. Litvak convinces him to watch a recording her dead husband left. In it, Mr. Litvak explains that his trauma suffered in the Holocaust attracted the attention of a malevolent demon – a Mazzick (Rob Tunstall) – which feeds on human grief and regret. The demon cursed him and followed Rubin to the US, and tortured him and his wife until the day of his death. Rubin says that the Mazzick will now latch on to the next person it finds that has suffered great trauma – Yakov. The only way to be free from the Mazzick is if Yakov burns the demon’s face before dawn arises. Otherwise, the curse will attach to him permanently. Yakov tries to leave the house, but the Mazzick causes him to suffer incredible pain until he returns.

It is revealed that before he left the Orthodox community, Yakov his little brother were walking home when they were accosted by some bullies. Yakov watched, too afraid to intervene, as the bullies harassed his brother and cut off a lock of his ritually grown hair. The younger brother finally managed to escape but was hit and killed by an oncoming car as he fled. Yakov blames himself for his brother’s death, ashamed at his cowardice. The Mazzick wants to feed on this trauma and haunts Yakov with ghostly visions of his younger brother.

With Mrs. Latvik’s encouragement, Yakov embraces his faith and decides to face the Mazzick. Although initially paralyzed by fear, Yakov finds the demon and manages to set the Mazzick’s face on fire and destroy its power over him. Yakov then gets a vision showing Rubin’s trauma that initially attracted the Mazzick. The Nazis had forced him to kill his own wife, which was a grief he could never overcome. Through prayer, Yakov can force the Mazzick to release its hold over Rubin’s spirit (and thus the house). As the morning light dawns, Rubin’s soul is freed to rest in peace. With the curse broken, Mrs. Latvik can leave the house.

Yakov rebuffs Reb Shulem’s offer to attend services together (though says he may take him up on the offer in the future) and instead leaves to go on the date with his group member. Yakov finally seems ready to move forward into the future having come to terms with his trauma and grief. As he leaves the Litvak’s home, Yakov experiences a moment of pain. The Mazzick is then seen stumbling out of the home, but it is left unclear if it is simply searching for a new host or still trying to curse Yakov. 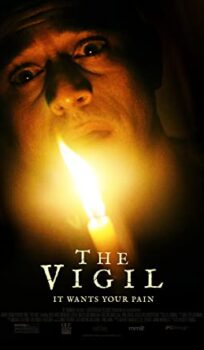