Pooper:
Daniel throws both himself and the evil Dr. Powell into the void. Only Kim and the Son make it out alive. Daniel is reunited with his wife, Allison, inside the void.

Long Ending:
The movie opens as a man named James flees from a house with a triangle symbol on the door and into the woods. He is followed by a Father (Daniel Fathers) and his adult, mute Son (Mik Byskov). James escapes and collapses in front of a police car driven by local officer Daniel (Aaron Poole). Daniel drives the unconscious James to a hospital that is soon shutting down. Accordingly, the hospital is only staffed by Dr. Powell (Kenneth Welsh), Daniel’s wife Allison (Kathleen Munroe), an intern named Kim (Ellen Wong), and another nurse. There is only one bed-ridden patient in the hospital, as well as a grandpa who is there with his pregnant granddaughter, Maggie. They are later joined by a state trooper who is in search of James.

Daniel is having marital issues as he and Allison recently lost their baby. While avoiding his wife, Daniel hears a commotion in the bed-ridden patient’s room and enters to see the nurse stabbing the patient to death and cutting off her skin. She yells something is inside of her before attacking Daniel (who shoots her dead). Daniel goes outside to radio a report to dispatch, but is accosted by a bunch of robed and masked figures who have surrounded the hospital. Things get weirder as they hear horns blow in the distance and all communication devices are disabled.

Father and Son break in to the hospital to kill James. During the standoff, the nurse awakens, turns into a mutant, and kills the state trooper (before being killed herself by Father and Son). James also stabs Dr. Powell in the throat, seemingly killing him. Eventually, Daniel, Father, and Son learn that Dr. Powell was the leader of the cult of robed and hooded figures and had been conducting eXperiments to summon ancient beings that could raise the dead (James was meant to be a test subject, and Father and Son mistook him for a cult member). Dr. Powell was hoping to use these beings’ powers to bring his dead daughter back to life. They then discover that Dr. Powell has revived himself and kidnapped Allison. The trio, as well as James, pursue Dr. Powell into the hospital basement and through a portal into a domain where Dr. Powell had been conducting his eXperiments.

While the others are in the basement, Maggie kills her grandpa and reveals that the baby is Dr. Powell’s. Kim manages to hide in the air ducts while Maggie and the robed/hooded followers descend into the basement. We also learn that Father and Son became involved when Dr. Powell’s cult abducted and killed the wife and mother of the family (and also injured Son to render him mute). Some of Dr. Powell’s mutants kill James, and only Daniel makes it to Dr. Powell’s lair. Upon arrival, he finds that Dr. Powell has mutated Allison (to be a host to a mutant baby) and transformed himself into a skinless creature. Carter kills Allison before pursuing Dr. Powell again.

The Son finds Kim and the pair embrace as the only survivors of their ordeal. Meanwhile, inside the void, Daniel is reunited with Allison. The two hold hands as they look up at a giant, ominous pyramid (Dr. Powell’s cult utilized pyramid/triangle symbols throughout the film). 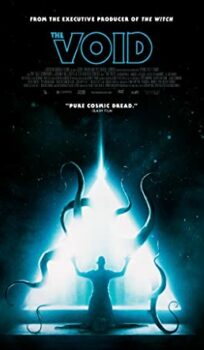