It turns out that the “green container” that Ryan, Samson’s young cub son, boarded is actually being sent to Africa not to ship animals there, but to pick up animals in danger, as they are on a volcanic island. Samson and his friends Benny, Nigel, Bridget, and Larry all get on board a small ship and chase after the vessel containing this container, but manage to lose Ryan when they get to the volcanic island.

They begin searching for him, but Samson gets separated from the group when he admits that he himself did not grow up in the wild, but rather a circus act where he dad basically sent him away because he could not growl like a real lion (sort of the same problem he’s having right now with Ryan). The others are soon captured by a group of wildebeests led by the evil Kazar, who’s just as concentrated on evil deeds as he is on dancing. They mistakenly figure that Nigel is their God, since a stuffed animal resembling him landed on the island years ago and saved Kazar from danger.

Ryan is captured, just as Samson has found him, and Samson is knocked off a tree down a cliff. Benny finds him and manages to get him back on his feet, and, with the help of some covert chameleons who can change colors on figures, they sneak into the cave where the others are being held. However, some steam in the volcano knocks off the chameleons, and Samson is revealed. His friends manage to get away from the group as Samson begins fighting off Kazar and his followers, but Ryan is soon launched (with the help of a “trick play” used for turtle curling earlier in the film) at Kazar, roaring and landing right on him.

Soon, the other wildebeests turn on Kazar, implying that his choreography isn’t all that, and Samson roars him off with a mighty roar. Soon, the volcano begins fully erupting, and the other animals manage to escape as Kazar is left behind. Samson, his friends, and the other wildebeests manage to escape on the boat as the island is coming down, and they celebrate by bursting into song and dance. Benny is greeted by a big ol’ kiss by Bridget, while Nigel throws the stuffed toy that Kazar found overboard. And Samson is happy that Ryan finally found his roar. 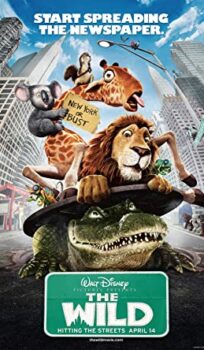