Evillene, the Wicked Witch of the West (Mabel King) captures Dorothy (Diana Ross) and her companions and has them brought to her sweatshop. She demands the Silver Slippers from Dorothy and tortures her friends the Scarecrow (Michael Jackson), the Tin Man (Nipsey Russell) and the Cowardly Lion (Ted Ross). They all beg her not to give in. When Evillene threatens to have Dorothy’s dog Toto dropped in a furnace, Dorothy prepares to take off the slippers – until the Scarecrow points out a lever marked “In Case of Fire”. Dorothy pulls it, and activates a sprinkler system; Evillene, who is allergic to water, melts away and the heroes and her now-freed slaves celebrate.

The Flying Monkeys return the heroes to the Emerald City and drop them off at the back entrance to the Wiz’s chamber. Inside they discover that the Wiz (Richard Pryor) is actually Herman Smith, a failed politician from New Jersey who arrived in Oz when a hot air balloon campaign stunt went awry. The people here believed him to have great powers, and he hid himself behind the Wiz identity out of fear he’d be found out.

Dorothy’s friends despair over losing their chance at gaining brains, heart, and courage, respectively, but Dorothy points out that in the course of their adventure they displayed those qualities; all they need to do now is believe in themselves. When they point out she can’t get home, she is ready to accept this — then Glinda, the Good Witch of the South (Lena Horne), arrives. Glinda explains to her that “home” is where her heart is, and if SHE believes in herself, she will be able to return to Harlem via the Silver Slippers.

Herman asks Dorothy if she can help him, and she replies that he’ll have to solve his problems himself, and that means venturing out into a world he’s afraid of – the lesson she learned in her journey. Dorothy bids goodbye to her friends, and once she clicks her heels three times, she and Toto are transported back to the street in front of her brownstone. The snowstorm has stopped, and they head inside. 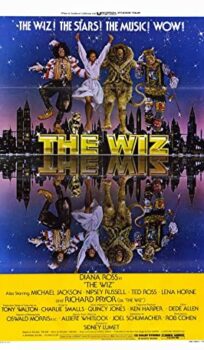