Corey Woods (Fred Savage) decides to run away with his traumatized younger brother, Jimmy (Luke Edwards), to California. The boys’ parents divorced after Jimmy’s twin sister Jennifer died, Corey and older brother Nick living with their father, Jimmy living with his mother and her new husband.

Along the way, Corey realizes Jimmy is a ‘wizard’ at video games. They pick up street-smart, wise-talking Haley (Jenny Lewis), who is also headed west. Corey and Haley decide to enter Jimmy in a video game competition. They run into Lucas, who believes he will win the tournament and whose goons torment the trio as they try to make their way across the country, avoiding parents and a Private Eye hired to track them down.

The parents finally catch up to them just as Jimmy wins the tournament and the prize money by defeating Lucas at the previously unreleased Super Mario Brothers 3.  As they return home, Jimmy spies the dinosaur that was the site of the last vacation the entire family. Jimmy places a picture of the whole family together inside the dinosaur and everyone heads home. 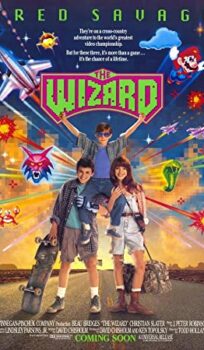