The World According to Garp

Garp (Robin Williams) becomes despised by radical feminists when he writes and publishes the true story of rape victim Ellen James (Amanda Plummer), who wants her so-called “followers” to stop mutiliating themselves. Pooh Percy (Brenda Currin), grown up and having become an embittered Ellen Jamesian, shoots Garp as he coaches wrestling practice. The film ends on an ambiguous note as Garp is taken away in a helicopter/ambulance. He notices and comments that he is flying (just like the father he never met), and the view switches to that of the “baby Garp” seen in the opening sequence.

If the ambiguity is just a little too difficult to take, please be aware that in John Irving’s original novel, Garp is clearly, “really most sincerely,” dead. 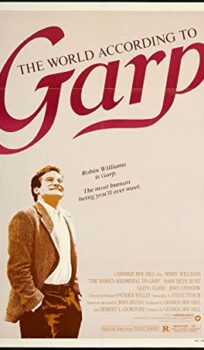