While Bruce (Johnny Yune) is in Chicago with Freddy (Ralph Mauro), Karmen (Margaux Hemingway) finally achieves the objective Big Al (Martin Azarow) set for her by switching out the last bag of cocaine that Bruce is (unknowingly) delivering to Lil Pete’s (Bill Capizzi) boss, the Boss of Bosses (Tony Brande), in New York City with a bag containing actual flour, and calls Big Al to let him know about it (Big Al is seeking to supplant Lil Pete as the head of the West Coast branch of the mafia, so he figured that, if Bruce and Freddy were made to bungle up this cocaine deal, the Boss of Bosses will have Lil Pete killed for it, which will give him the opening he needs to ascend to the leadership role with Karmen ruling alongside him as a reward for her assistance). When Bruce and Freddy meet the Boss of Bosses in a warehouse and give him the bag of “cocaine”, his chemist tests it and tells him that it is just flour. The Boss tells Freddy and Bruce that they will die for this, but when he goes to shoot Bruce first, Freddy – who has come to see Bruce as a friend – grabs his gun and makes him miss. Bruce and Freddy manage to flee the warehouse soon after, and though it takes them a while, they ultimately succeed in losing the mobsters with the help of a street gang that they befriend.

The gang gets them a hiding place in the form of a room in a cheap hotel, and that night, Anita (Pam Huntington) – the undercover federal agent who made herself Bruce’s girlfriend earlier in the film and then gave him a necklace with a hidden microphone installed in it as a token of their exclusivity – suddenly appears at their door. She confesses to Bruce that she is a federal agent and that the necklace she gave him is bugged, and she and her fellow agents have been using the necklace to monitor his and Freddy’s conversations and track them all across the country. She then informs Bruce that he has spent this entire journey unwittingly delivering cocaine, and Freddy admits to Bruce that he knew about it, and though he wanted to tell him, he couldn’t because he took an oath to Lil Pete (plus Lil Pete promised to make him his new consigliere in place of Big Al if he and Bruce completed all of the cocaine deliveries). Anita tells Bruce to not blame Freddy, because if he had said anything, then they would both be dead now. All of this upsets Bruce, who tells them that he made an oath to Bruce Lee to strive to be as great a man as he was, and now he feels that he has disgraced his name. Anita informs him that he can make up for everything and get amnesty for Freddy, but she needs his help. She explains that, if she and her fellow agents can catch the drug dealers, they can stop the entire distribution of all the drugs in the underworld, and if Bruce helps them accomplish this, then they will help him find the “lady” that his grandfather told him to find in this city that would take care of him. Bruce agrees to assist her.

A day or two later, Bruce and Freddy get the Boss to meet them again at the same warehouse, where they claim to have a new bag of cocaine for him. Shortly after the Boss and his men arrive, the Boss demands that Bruce hand over the cocaine, and Freddy tells him to go ahead and give it to him. Bruce then suddenly hits the Boss with a kick, and then Anita and a bunch of other federal agents emerge from various hiding places and attack the mobsters. Though the underlings are subdued and soon cuffed by cops who pull into the warehouse, the Boss tries to sneak away. Freddy alerts Bruce to this, so Bruce chases after him, and he eventually finds him hiding in a closet. Bruce forces him out so the police can arrest him as well.

Afterwards, Freddy has a heartfelt goodbye with Bruce since he is likely going to be put in the witness protection program, and Bruce gives him the bugged necklace “so he will always know where his best friend is”. Sometime later, Anita takes Bruce to where the “lady” is in accordance with his grandfather’s map, and we find out that the lady is the Statue of Liberty. Bruce tells Anita that his grandfather was right when he told him that she is the most beautiful lady in the world, but Anita corrects him by replying that, when his grandfather told him that “she” would take care of him, he actually meant America. As they begin to walk off arm-in-arm, Bruce suddenly hears the statue tell him to not forget the most important thing in life. He smiles at this, knowing that she means “broads” because that was what his grandfather always told him. 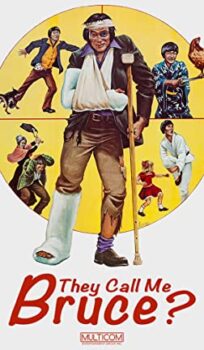