While Polly (Bethany Wright) and Billy (David Mendenhall) are waiting at Bruce’s (Johnny Yune) home for him to return from checking out the last Private Ernie Brown on his list, Mr. B’s (Carl Bensen) goons Spider (Jerry Young) and Gator (Roy Morgan) break in and kidnap Polly, and they knock out Billy when he tries to stop them. Bruce arrives a short time later, and after seeing what has become of Billy, he takes him to the hospital. After finding out from a nurse that Billy has been put into a coma and can’t have any visitors until he comes out of it, Bruce heads back to Susie’s Massage Parlor to try to free Polly, figuring that she might have been taken there because she used to work there (earlier in the film, he tried to defend her there from one of Mr. B’s goons, but he was booted out of the parlor by said goon along with two others and forced to leave behind the antique vase that he intended to give as a gift to Private Brown, which subsequently ended up in Mr. B’s hands).

He sneaks into the parlor disguised as a geisha, and he finds himself giving an acupuncture session to Mr. B. He excuses himself for a moment so he can look for Polly, and though he finds her being held by Spider and Gator in another room, the manager forces him to return to Mr. B’s room before he can free her. When Bruce ends the session and Mr. B tips him, Mr. B discovers that he isn’t a woman and screams for Spider and Gator to come to him. After the two henchmen appear, they tell Mr. B that this guy is the Bruce who is reputed to be a martial arts master and has been causing them a lot of trouble recently, and Spider then suggests to Mr. B that he make a deal with Bruce about taking part in his upcoming nationally-televised championship freestyle fight. Liking this suggestion, Mr. B tells Bruce that, if he accepts an offer he is about to make to him, he can see Polly again, but if he doesn’t, then unpleasantries will befall her. He then gives Bruce the rundown on his upcoming show and says that he wants him to take Master MacLean’s (Lee Holmes) place in it since he cannot be located, and his opponent will be the five-time national champion known as “The Executioner” (Donald Gibb). He tells Bruce that he will release Polly if he throws the fight in the seventh round, and Bruce agrees to cooperate, but only after he gets Mr. B to promise him that, in addition to letting Polly go free, he will also erase MacLean’s debt to him and pay Billy’s hospital bill. Before he takes off, Bruce lastly tells Mr. B to bring the antique vase to the show.

Though Bruce has ringside support from the Neighborhood Action Group (N.A.G.) – Ronnie (Joey Travolta), Connie (Dana Conlin), Victor (Carlos Compean), and Irving (Daniel Neiden) – that he befriended at the start of the film, along with Polly (who is seated with Mr. B, Spider, and Gator), the Executioner dominates the match from the opening bell, thanks to Bruce’s lack of fighting skills and Mr. B’s threat looming over him. Having already come out of his coma and started watching the fight on TV, Billy decides to sneak out of the hospital and get to the arena, both to root for Bruce in person as well as give him back the sock he had earlier given him for good luck. He makes it to the ring just as the seventh round is about to start, and he hands the sock to Bruce and tells him to put it on and “sock it” to the Executioner. The now-invigorated Bruce gets the sock on, and he proceeds to beat up the Executioner using martial arts moves that he has hitherto never exhibited. Alarmed, Mr. B orders Spider to do something.

Bruce knocks out the Executioner and becomes champion, but then Spider and Gator stand up, and the former whips out a knife in front of everyone and grabs Polly. However, before any harm can come to her, the goons are quickly seized by both the N.A.G. and some policemen working as security guards, and then Polly grabs the vase out of Mr. B’s hands and runs into the ring to meet with Bruce. When Mr. B tries to follow, Connie knees him in the groin, and he is apprehended as well. The police captain (James Mendenhall) – a dirty cop on Mr. B’s payroll – then appears and orders the officers to unhand Mr. B, but Slim (J. David Moeller) – who has been working undercover for the district attorney collecting evidence to implicate Mr. B and discovered that the captain was in league with him – shows up and presents the captain with a warrant for his arrest. All of the bad guys are then taken away.

Despite winning the fight, Bruce expresses to Polly and Billy how disappointed he is that Mr. B is apparently the Private Brown that he has been looking for. However, Slim then gets up on the ring apron and reveals to Bruce that his full name is Ernie “Slim” Brown and that he is the very soldier who saved his life back in the Korean War. He tells Bruce that he knew that he was the child he rescued, but he couldn’t reveal himself to him because he was working deep undercover. Bruce hugs him and gives him the vase, and Slim presents Bruce with an honorary inspector’s badge for his efforts to stop crime, plus Polly tells Bruce that she wants to marry him. He then receives a standing ovation from the crowd. 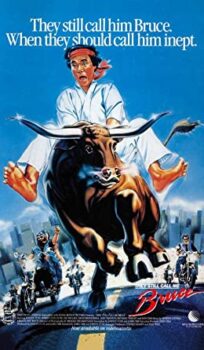