Cyrus (F. Murray Abraham) is still alive, and Kalina (Embeth Davidtz) is actually helping him to lure Arthur (Tony Shalhoub) into the “Ocularis Infernum.” Contrary to what Kalina told him, Arthur’s self-sacrifice won’t save his kids; it will kill all three of them and give Cyrus the powers of Hell. Maggie (Rah Digga) has somehow survived Kalina’s attack, and manages to destroy the machine’s control mechanism. This releases the ghosts, who seize Cyrus, cut him into little tiny pieces, and depart. The kids’ lives are still in peril, so the ghost of Dennis (Matthew Lillard) appears briefly to guide Arthur, who saves them. The family gets a chance to say a peaceful goodbye to mom Jean (Kathryn Anderson). 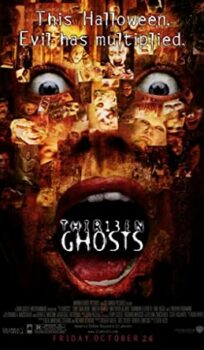