Rock musician Gary Strahorn (Parker Stevenson) is hospitalized for a nervous breakdown.  Doctors order him to take a rest.  He hires his hospital nurse, Sheila, to care for him.  Together, they buy an isolated mansion.  They act more like newlyweds than patient and nurse.  There are cameras all over the house, that turn on and off on their own, monitoring them.

When Gary’s old girlfriend shows up, Sheila is jealous.  The girlfriend gets locked in a shower that fills with blood.   The town librarian shows up with information about the house’s history.  The librarian is crushed to death by the front gates.  Gary’s manager (Slim Pickens) arrives to arrange a tour of Europe for Gary and Sheila.  A mirror explodes, sending a large glass shard through the manager’s heart.

An old lady in town has been calling Sheila by the name Margaret, and telling her she should not have returned.  The old lady comes to the house.  She tells Sheila/ Margaret the history of the house.  Sheila was born in that house, and named Margaret.  Her father was an architect and designed the house.  The house is possessed by a spirit that is obsessed with Sheila.  It killed her parents.  The old lady was Sheila’s nanny.  The house kills the old lady, drowning her in a boiling hot tub.

The house starts trying to kill Gary.  Locked in the laundry room, Gary lights the pile of clothes on fire.  This burns the door, allowing Gary and Sheila to escape.  However, in the yard, a hose wraps around Gary, squeezing him like an anaconda.  As the house burns down, it loses its power.  Gary is freed, and Gary and Sheila escape. 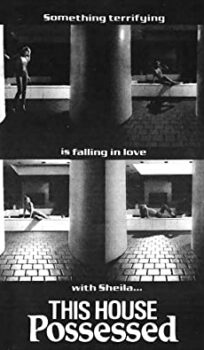