A police officer is stopping all vehicles on a remote highway at 3AM. He informs them that the government has detected incoming nuclear missiles.  The city is being evacuated, and he is to prevent anyone from entering.  The officer is a tyrant, bossing everyone around and refusing to let anyone leave. He orders them to pack dirt around the tractor trailer, to build their own little bomb shelter.  Everyone resists his dictatorship, but he is big, strong and armed with a gun.  He shoots and kills the dog, because it is using up their oxygen in the trailer.

The grandfather knows an accessible mine nearby, that he thinks is safer than the truck.  He takes his granddaughter and the nice truck driver there.  He says he is too old to live after a nuclear war.  He climbs the mountain, to watch the bombs coming in.

A group of looters from the city arrive.  They beat up the policeman, and abduct the two women.  The other men lock themselves in the truck.  The policeman regains consciousness, and begins banging on the truck to be let in.  We see the flash of the exploding bombs.

Summary of each persons fate: 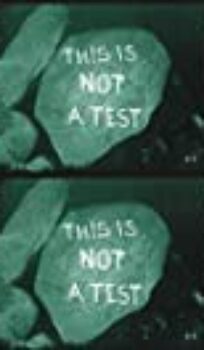