POOPER:
Jay and Seth forgive each other and are raptured at the last minute before a giant demon beast kills them. They make it to heaven where Craig Robinson is waiting (as everyone else died and did not go to heaven), and they have a huge party where the Backstreet Boys Perform.

LONGER VERSION:
Seth Rogen picks up Jay Baruchel from the airport and plan on spending a weekend together in LA. James Franco has a house party and the apocalypse begins. Most of the celebs (Michael Cera, Mindy Kaling, Rihanna, Jason Segal, Kevin Hart, Aziz Ansari, David Krumholtz, Martin Starr) die by falling into the sinkhole outside Franco’s house. The good souls are raptured to heaven, while others are left behind in a burning Los Angeles.

The end happens for each of the characters in this way:

Seth and Jay are greeted at the golden gate by Craig, who is now an angel.  They enter the pearly gates and join the giant party in heaven. The movie closes with a choreographed dance featuring Seth, Jay, Craig and the Backstreet Boys to “Everybody (Backstreet’s Back)”

Thanks Brett (Long) and A.S. (Pooper) 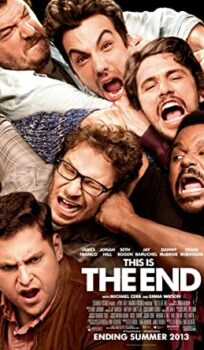