The three main characters are Mildred Hayes (Frances McDormand), whose daughter was raped and killed seven months earlier, Chief Willoughby (Woody Harrelson), the man in charge of the police station and case, and Dixon (Sam Rockwell), a slow-witted cop in a slight controversy for torturing a black suspect.

After spending one last great day with his family after being admitted to the hospital for terminal pancreatic cancer, Chief Willoughby kills himself, leaving behind letters for his family, Mildred and Dixon. He also pays for an extra month of the billboards staying up after his death.

Dixon, while living with his mother, is more offended by the billboards than Willoughby himself. He beat up and throws Red (the man who owns the billboards and approved them) out of a window, getting himself fired by the new chief.

When the billboards get set on fire, Mildred is convinced the police had something to do with it. While Dixon is picking up his letter that Willoughby had written after hours in the police station, Mildred throws four Molotov cocktails at the station, setting it on fire. After reading Willoughby’s letter, which basically states that Dixon can be and should be a good person if he remains calm and starts to notice things (though not noticing the fire initially due to headphones and music), Dixon dives out the window while on fire himself, saving Angela Hayes’s file. While in the hospital, severely burned, Red shows him kindness even though he was severely injured from the fall.

It turns out it was Mildred’s abusive ex-husband who set the billboards on fire. His new girlfriend tells Mildred, “Anger begets more anger,” and she forgives him.

Later, at a bar, Dixon overhears a man (who had previously threatened Mildred and implied he was the rapist) talk about raping a girl and setting her on fire. He gets the man’s Idaho license plates and purposefully gets into a brutal fight with him, scratching his cheek to collect DNA.

The man from the bar was not the man who raped and killed Angela Hayes. He was out of the country and his DNA didn’t match. However, Dixon calls Mildred and they decide to drive to Idaho to confront the man they’re sure raped someone. When Mildred admits to setting the fire that burned Dixon and he basically says, ‘no kidding, who else would have done it?’ Mildred smiles and laughs for the first time since her daughter was killed.

They decide that when they get to Idaho, then they’ll decide if they want to kill the man from the bar. 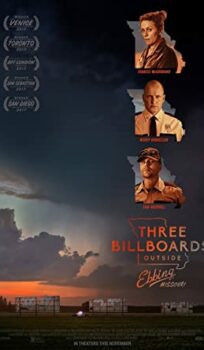