John Doherty (Clint Eastwood) is a preacher who is chased from his pulpit by an assassin.  Lightfoot (Jeff Bridges) has just stolen a car and is driving down a country road when he comes across the preacher and the assassin.  Lightfoot runs over the assassin, killing him, and picks up the preacher.  The two hit it off and becomes friends.  Later, Lightfoot learns that Doherty is a former bank robber named Thunderbolt who helped rob an armory and hid the money in an old one-room schoolhouse behind the chalkboard.  He is the only one who knows the location of the money, and the rest of his crew, led by Red Leary (George Kennedy) is chasing him.  It was one of the former members of the crew that tried to kill him at the beginning of the movie.  Thunderbolt was pretending to be a preacher because he thought they would never find him if he was a preacher.

During the getaway, the team is chased by the police.  They shoot at the car, and one of the bullets goes into the trunk and kills Eddie.  After they escape the police, an enraged Red forces Thunderbolt and Lightfoot out of the car and pistol whips both of them unconscious.  Red then repeatedly kicks Lightfoot in the head, following through on his violent threats to Lightfoot that he said throughout the movie.  He then takes the car and all the money and flees.  He is chased by the police again, where he ends up crashing into a department store, and is mauled to death by the guard dog.

Thunderbolt and Lightfoot eventually come to and continue their escape on foot.  Lightfoot is clearly injured, but he says he’s fine.  The next morning, they come across a historical landmark, which includes an old one-room schoolhouse.  It’s the same schoolhouse where the money was hidden, because the building was moved instead of torn down as was originally feared.  The duo enter the schoolhouse, remove the chalkboard, realize the money was still there after all this time, and take it.  Lightfoot notices that he is going numb on his left side, but still doesn’t believe it’s serious.

Later that day, Thunderbolt buys a white Cadillac (something Lightfoot always wanted to do) and they drive away.  While smoking cigars, Thunderbolt notices that Lightfoot’s speech is slurred and tells him he doesn’t look well.  Lightfoot agrees that he’s hurt, then dies a few moments later.  The movie ends with Thunderbolt breaking his cigar and driving into the sunset with a deceased Lightfoot in the passenger seat. 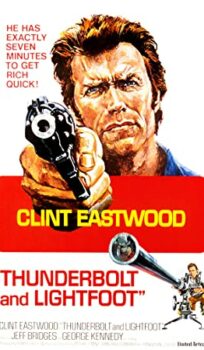