The Queen (Jessica Lange) early in the film sought revenge on Titus by having her sons rape his daughter, cut off her hands and take out her tongue.

To gain HIS revenge, Titus (Anthony Hopkins) invites the King and Queen to dinner. During dinner he tells a myth about a man who kills his daughter to put her out of her shame.

He then breaks his daughter’s neck. At this point, Titus tells the queen that the meat pies they were eating were made out of her sons that he had killed by hanging them by their feet and slitting their throats.

The queen gags and Titus stabs her in the neck and kills her. The KIng, kills Titus by taking a 3-pronged candlestick and stabbing it into his chest.

Titus’ last son, kills the King by cramming a ladle down his throat. 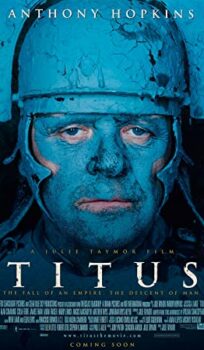