General Aquila realizes that when the 13 monsters are sent back, Max Winters and the generals will all become mortal and die. On the other side, Leonardo and Raphael fight. When Raphael defeats Leonardo, he runs off just as Leonardo gets hit with a tranquilizer dart. Aquila captures Leonardo since he knows that Winters does not know what the 13th monster looks like, and can use the opportunity to betray him. Raphael returns to the sewer and explains the whole ordeal to Splinter and the rest. They, April, and Casey Jones barge in on the Winters estate as the stars align and the gate opens, returning 12 of the monsters to the place whence they came, revealing Aquila’s betrayal to Winters. Winters says that if all 13 are not returned, another 13 will emerge to wreak havoc on the world for another 3,000 years. The Foot Clan, now led by Karai, agree to help April and Casey capture the 13th monster as it will maintain order in the world. At the same time, the four reunited Turtles fight the four Stone Generals while the 13th monster chases April and Casey back to the Winters building. The Turtles, fighting as a team, defeat the four generals just as the 13th monster arrives. It and the four generals are sucked back into the vortex as it closes, sealing the two worlds, restoring peace to galaxy. Winters thanks April and the Turtles for their aid as he diminishes into oblivion. Karai leaves the turtles with the promise of the return of a familiar face (you know you’re thinking it).

Back in the sewer, Splinter places on the shelf Winter’s battle helmet, next to Uroku Saki’s mask and the Sceptre from part III. Raphael and Michelangelo also offer to have their masks put away for good. The world is saved. 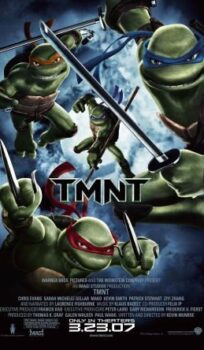