Shawn (Lucas Black) is transferred to Tokyo after an incident with the police, to live with his dad.  While he’s there, he bumps into the likes of Twinkie (Bow Wow), Han, and DK, the Drift King, as he gets slowly involved in Tokyo underground street racing.  Along the way, Han gets killed in an explosion, and Shawn finds himself challenging DK, with the loser having to leave town.  Shawn eventually wins the race.

The final scene shows a challenger from Han’s side of the family who wants to race Shawn- Dominic (Vin Diesel) from the original Fast and the Furious. 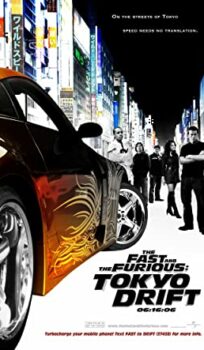