This is an anthology in which every segment focuses on a story taking place in Tokyo, Japan. There is no wrap-around story.

Interior Design (directed by Michel Gondry):
Hiroko (Ayako Fujitani) and Akira (Ryô Kase) are a young couple moving to Tokyo so that Akira can pursue his film career. Akemi (Ayumi Itô), Hiroko’s friend, offers to let them stay in her cramped, one-bedroom apartment for a week while the pair try to find an apartment. Akemi doesn’t realize that the pair have almost no money and virtually no plans for finding an apartment. As the days go by, Akira gets a part-time job and prepares to debut his film in a small, local theater. Although Hiroko looks for apartments, they are either unaffordable or too run down. She is unable to find a job, and Akira also criticizes her for lacking ambition. Hiroko manages to rescue Akira’s film equipment from an impound lot after their car is towed, but doesn’t tell anyone about the incident (seemingly blaming herself for the predicament).

Although Akira’s film is pretentious and his antics of pumping smoke into the theater as the movie plays unnerve some people, others hail him as a genius. Hiroko introduces herself as only the “girlfriend of the director” as both Akemi and the other film-goers flock to Akira. That night, Hiroko hears Akemi blame her for not moving out and begins sobbing.

The next day, Hiroko wakes up to find some of her body parts are turning into wood. She runs through the streets of Tokyo to try and find Akira, but her transformation continues. She eventually turns into a wooden chair. A man finds the chair and takes it to his apartment. There, we watch as Hiroko spends her days in the form of a chair when the tenant is home and lounging around the apartment as a human when he is not.

The short film ends with Hiroko writing a letter to Akira. She asks whether he is famous (or at least gainfully employed) and imagines him in a relationship with Akemi. She ends the letter writing that she has never felt more useful than she does now.

Merde (directed by Leos Carax):
A human (Denis Lavant) with talon-like fingernails, a milky eye, and a crooked red beard emerges from the sewers to terrorize the people of Tokyo. As he walks along the street, he steals items from people, eats a bunch of flowers, licks people, and otherwise terrorizes them before returning to the sewers. The news covers this rampage and refers to the man as a horrible creature plaguing Tokyo.

Though many people are disturbed by the creature, the media regards him as a quirky news story. This changes, however, after the man finds a box of grenades left over from World War II and begins throwing them at people and vehicles when he surfaces from the sewers. After the man racks up a huge body count, the authorities storm the sewers and arrest him. They fly in a Frenchman named Voland (Jean-François Balmer) to serve as the man’s attorney. Voland has the same physical characteristics as the man and is one of only three people in the world that can speak the same language as him. Through Voland, we learn that the man’s name is Merde (French for “shit”).

A high-profile trial ensues where Merde claims that his God sent him to live amongst and kill the Japanese people for being filthy. During the course of the trial some Japanese demand he be killed, while others demand his freedom, and some even view Merde as a prophet. The court deems Merde sane and sentences him to death for his crimes. Merde is hung and a doctor even confirms his death. But when all the witnesses look away for a moment, Merde disappears (seemingly still alive). During the credits, an advertisement promises that there will be a sequel of Merde living in New York.

Shaking Tokyo (directed by Bong Joon-Ho):
A man referred to as L’homme (Teruyuki Kagawa) is a hikikomori – a person who has withdrawn from the world. He hasn’t been outside his home or watched TV in over a decade. His father sends him money every month and he uses it to have food and other goods delivered to his home. L’homme is so withdrawn that he hasn’t looked another human in the eyes for years.

One day, the garter belt of a pizza delivery woman (Yû Aoi) intrigues him and he looks up. When he meets her eyes, the house starts shaking and the woman falls unconscious into L’homme’s house. He eventually realizes she has buttons throughout her button, one of which is labeled “coma.” He musters the courage to press that button, and she awakens. The woman praises his apartment as perfect before leaving. After “recovering” from the experience, L’homme decides he wants to see the woman again and orders another pizza. However, the man who delivers it tells L’homme that the woman has quit her job and decided to become a hikikomori herself. The delivery man gives L’homme the woman’s address before he leaves.

L’homme cannot get the woman out of his mind, so he decides to venture outside for the first time in 11 years. He finds that his home is covered in ivy. As he walks to the woman’s house, he finds the streets are abandoned and that robots are even starting to deliver food to people. L’homme realizes that everyone in Tokyo is becoming a hikikomori.

When he arrives at the woman’s apartment, he begs her to come out. As he yells for her, the entire apartment building begins shaking. The withdrawn residents flee outside for their lives, worried the building will crumble. Once the shaking stops, they all slowly retreat to their homes. L’homme sees that the woman is also retreating inside and grabs her home. When she asks him to let go, he says he can’t because he “pressed it.” The woman looks down to see that L’homme is pressing the button labeled “love.” 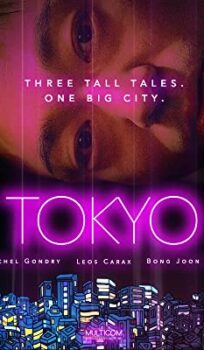