Long-time rivals Tom and Jerry find themselves in New York City at the Royal Gate Hotel. When a young woman named Kayla Forester secures a job there after stealing another woman’s resume, she finds that the cat and mouse can cause problems for a wedding that weekend for rich couple Ben and Preeta. Kayla gets Tom’s help to catch Jerry before the wedding is ruined. Meanwhile, events manager Terence Mendoza is suspicious of Kayla.

Tom and Jerry engage in their usual antics, even getting Spike the dog in on it. When Kayla gets Terence’s job after manager DuBros thinks he is stressing out, she asks the duo to keep it cool for the wedding if they want to stay. During the preparation for the wedding, Kayla learns that while Preeta and Ben really do love each other, she thinks all that Ben is doing for the wedding (like booking elephants to carry them) is too much.

Tom and Jerry start to get along until they are taken to the animal pound for disrupting a baseball game. Terence bails them out but manipulates them into hating each other again before sending them back to the hotel where they ruin the wedding with their shenanigans. Preeta calls off the wedding while Kayla must come clean to DuBros about her lies, so she quits.

Realizing it was their fault things went wrong, Tom and Jerry bury the hatchet and resolve to help Kayla save the wedding. They all work together to get everyone to Central Park for an impromptu wedding. Ben and Preeta reconcile and get married, while Kayla is allowed to keep her job. However, Tom and Jerry continue doing what they do best – fighting each other. 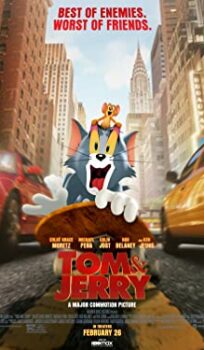