Though Tommy ends up falling for Randy, she winds up challenging him to a one-on-one stock car race after he hurts her pride by downplaying her driving abilities in front of his sponsor Ernie Leeds, Jr. and racing collectibles company owner Earl Delarue (plus she also takes his words as a knock against her gender). She tells her boss Chester about what she has gotten herself into, and he tells her that Randy’s putdowns were a way of putting her in her place, but in terms of her desire to race him, because she is crazy to think that a small-town grease monkey like her can beat a professional racer like him, who is using a car Ernie spent thousands of dollars to build. After Tommy lets Chester know that she is doing the race no matter what, saying that she just wants to beat Randy, Chester gives her a racing jumpsuit he made for her and helps get her car into the best shape possible.

With Chester and her friend Seville cheering her on, Tommy wins the race after the engine in Randy’s car burns out while they are on the final lap. Earl tells Tommy that he wants her car to race under his and Ernie’s banner in Daytona with Randy behind the wheel, and Ernie will make it worth her while. Tommy tells Ernie straight up that she wants 50%, plus all expenses will come out of his end. Despite his initial protests, Ernie agrees to accept her conditions. Randy then asks her if she will be coming to Daytona, but she asks him what he needs her for because he has her car, and he replies that it is not the same. However, she does imply to Seville that she will be going.

Tommy (Betsy Russell) ends up falling for Randy (Gerard Christopher), as does he with her, and they start hanging out with each other regularly. One day, Ernie (Eric Douglas) – whose company sponsors Randy and designed and built his stock car – has a meeting with Earl (Philip Sterling), the owner of a company that makes collectibles of champion stock car racers who has worked with Ernie’s father in the past. Having earlier done a check on Randy’s car himself, Earl tells Ernie that he feels the car isn’t worth committing a penny to, and he doubts that Randy is a real winner. To put his doubts to rest, Ernie brings him to the Center Raceway to watch Randy race the car.

After the car is taken for a few laps around the track, Earl tells Ernie that he is impressed with it and Randy is a great driver, but then Randy suddenly appears behind them, and they both soon discover that Tommy was behind the wheel the entire time. Earl is pleasantly surprised by this, and he compliments her on her skills and remarks to Ernie that it is unfortunate that she doesn’t have a car of her own because he might find himself in hot water. Tommy replies that she does have one, but after Earl expresses interest in seeing it, Ernie informs him that she is an amateur racer, and he prods Randy to speak further on it. Randy praises Tommy on her mechanical and design skills, but he downplays her driving abilities, which ruffles her feathers. Earl then suggests to Tommy that she race her car against Randy’s, but Randy refuses, not wanting to defeat her just to please him or anyone else. Her pride now wounded, Tommy takes Earl up on his suggestion, and he arranges for the race to be held a week from today at this very track, and he explains to her that there is a lot of money in this for her if she wins.

Tommy soon becomes emotionally out of sorts about the situation she has now found herself in, and Chester (Richard Erdman) – her boss at the auto garage – notices this and has a chat with her. She gives him the details on how she will be racing Randy and what led to it, and he tells her that Randy’s putdowns were just a way of him putting her in her place, but in terms of her racing aspirations. He elaborates by saying that she is crazy to think that a small-town grease monkey like her can defeat a professional driver like Randy, who is using a car Ernie spent thousands of dollars to build. Tommy replies that she doesn’t believe that these odds cannot be overcome, and adds that she is not doing this because she wants to become a professional driver herself; she just wants to beat Randy, and she tells Chester that she will do this with or without his help. Seeing that her mind is made up, Chester gives her a racing jumpsuit he made just for her, and then he helps her with getting her car into the best shape possible. The night before the race, Tommy confides to her friend Seville (Kristi Somers) that she believes Randy is going to clobber her, but Seville tells her to just go out there and give it her best shot because she just might win. Seville and Chester come to the race track the next day to lend their support to Tommy.

Though Tommy’s car is outfitted with state-of-the-art technology that puts it a cut above Randy’s vehicle, the race winds up being a back-and-forth affair. However, on the final lap, the engine in Randy’s car burns out, allowing Tommy to cross the finish line and pick up the victory. She goes to check on Randy immediately afterward, and he praises her and her car. Earl then approaches Tommy and says that he wants her car to race under his and Ernie’s banner in Daytona, but with Randy driving it, and Ernie will make it worth her while. Tommy tells Ernie straight up that she wants 50%, and all expenses will come out of his end, which he protests because his family has never paid more than 10% for a car. She tells him that her car was not built for his family, and no one will be calling the car by his family’s name; his family has been ripping off designers like her for years, and that is all over now. When he asks what the car will be called, she tells him that they will stick with its current name of “Tommy”. Ernie decides to accept her conditions.

Randy then asks Tommy if she will be coming to Daytona, and she asks him what he needs her for because he has her car, and he replies that it is not the same. She walks off towards her motorcycle so she can return home, but Seville asks her if she will indeed go to Daytona. After a pause, she looks in Randy’s direction, smiles, and says, “maybe”. 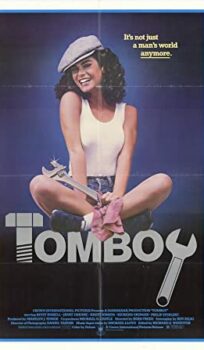