Pooper:
Kristy is not banished and seemingly kills all those at the cabin. But the film ends with Felicity having completed a rebirth ritual and bursting out of Kristy’s stomach.

Long Ending:
This (extremely gory) film opens with a girl named Kristy (Dal Nicole) running through the woods in a very rural area. Something in her stomach begins bursting out from within her. She attempts stabbing it, to no avail.

Flash forward. A mailman named James (Nathan Eswine) and his buddy Pete are driving through the area looking for Kristy’s house to deliver mail to her. James drops Pete off at the side of the road so he can go to the bathroom in the woods and takes off to keep looking for the house. He eventually finds it, but nobody is home. James takes a nap in a nearby hammock. Meanwhile, two of Kristy’s friends – Ashley (Larissa White) and Lyndsey show up at the house and begin partying. Unbeknownst to them, they are being watched by hidden figures.

The girls find James and the three begin hanging out. Meanwhile, Pete (who has been wandering through the woods looking for James) stumbles upon Kristy’s seemingly dead and fully naked body (later revealed to be the thing that burst out of Kristy’s stomach). The corpse soon reanimates and kills Pete, getting drenched in his blood in the process. Kristy eventually shambles over to James, Ashley, and Lyndsey and attacks them. While Kristy is killing Lyndsey, the hidden figures reveal themselves and beckon Ashley  and James to come into the house. The mysterious figures then use blood to create a mystical seal to keep Kristy outside.

The three mysterious figures are a family of Satanists. They include the father Francis, daughter Felicity (Jenna McDonald), and son Philip. The three had intended to use Kristy as a vessel to bring Francis’ wife back to life. But they didn’t perform it correctly, so instead, the demonic, zombified Kristy was born. Francis attempts to kill James and Ashley, but is killed in turn by his kids who want to set things right. They find a spell to banish Kristy and begin performing it. The spell involves lots of self-mutilation and collecting the blood of the four into a chalice (Philip dies in the process from blood loss). They almost complete the ritual, which requires that they all drink from the cup of blood. James refuses to swallow the blood and so the ritual fails.

James gets Kristy to kill Ashley so that he can escape. A vengeful and angry Felicity then kills James. Realizing that there is no hope to banish Kristy, Felicity confronts and is seemingly killed by her. Kristy then begins walking towards the nearby town. It is revealed, however, that before she fought Kristy, Felicity completed the same rebirth ritual that they did to Kristy. The zombie Kristy begins screaming in agony as a now zombified/reborn Felicity bursts out of her stomach. The movie ends with the zombified Felicity letting loose a demonic scream. 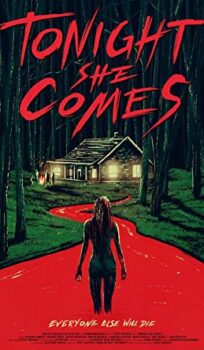