Unlike the original, which takes place on Mars, this takes place both on the Earth’s surface and inside the Earth itself.

Colin Farrell plays Quaid/Hauser. He’s a factory worker building robot police deep inside the Earth. He becomes unsettled, feeling he has done exactly the same thing day after day for years, and a new hire at work urges him to visit Rekall, a company that implants memories.

Quaid goes to Rekall and is just about to be put under and implanted with “a spy fantasy,” when cops bust in and kill everyone but Quaid. Much like the original, Quaid runs, discovering that his boring life is actually just a false memory. His wife (Kate Beckinsale) is trying to kill him (despite her bosses orders to keep him alive), and Quaid realizes that he is actually Hauser, a spy working for Cohagan, a man who basically wants to use his new robot Army to kill off the colonists (poor people) to make more room for the rich.

Hauser teams up with Melina (Jessica Biel) who seems to be Hausers’ girlfriend although he doesn’t remember her. The two manage to fight off the bad guys, finally blowing up Cohagen and his evil droid army. The Colonists are safe. 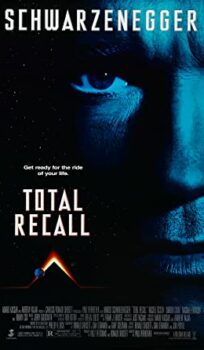